The Germany-Indonesia Strategy Dialogue, the fruit of collaboration between Konrad-Adenauer-Stiftung (KAS) and Center for Strategic and International Studies (CSIS), was continued through a second workshop in Jakarta that took place on 5-6 November 2018. The main focus of the presentation and discussion is “Maritime Security“.
December 4, 2018 Ordering Information 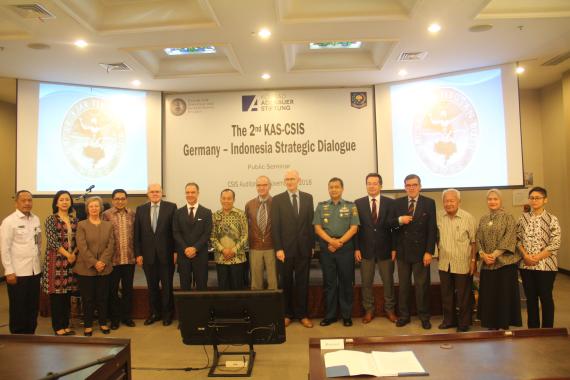 Group photo with participants of the dialogue 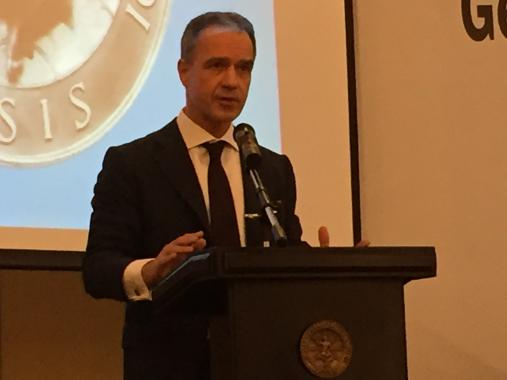 Welcome remarks by the Director of the Konrad Adenauer Foundation for Indonesia, Jan Senkyr 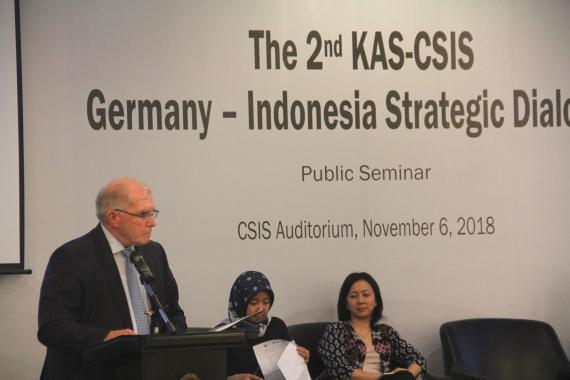 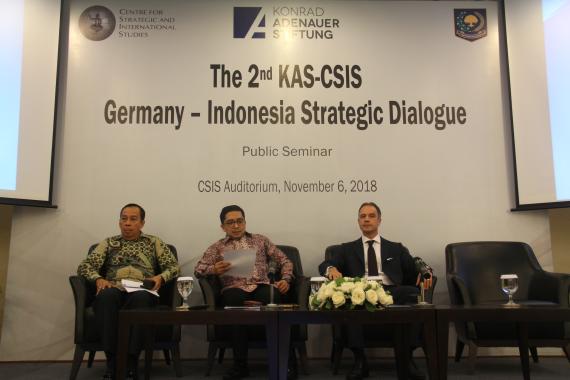 The public workshop on 6.11. was opened by a Key Note Speach of the Governor of the National Resilience Institute of the Republic of Indonesia, Lieutenant-General (R). Agus Widjojo. 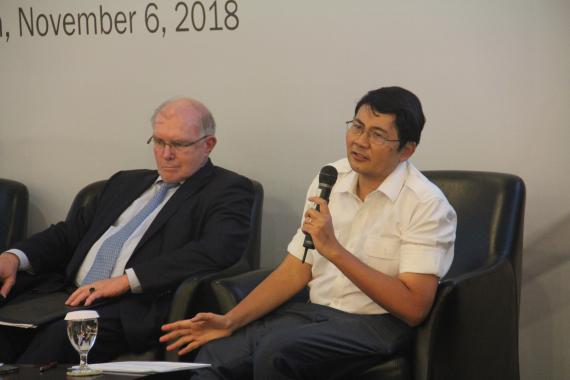 Dr. Siswo Pramono, Head of Department of Policy Development and Analysis of the Foreign Ministry, answered questions from participants during the panel discussion.

Germany and Indonesia have enjoyed sixty years of successful cooperation. Both countries have key roles in their respective regions – Germany in Europe / the European Union and Indonesia in Southeast Asia / ASEAN.
The latest chapter in this bilateral relationship was initiated by the “Indonesia-Germany Joint Declaration for a Comprehensive Partnership: Shaping Globalisation and Sharing Responsibility“. The “Jakarta Declaration“ was signed during Angela Merkel's visit to Indonesia in July 2012.

In June 2017 a Memorandum of Understanding (MoU) for maritime cooperation was signed by both countries. The agreement aims to support joint projects pertaining to maritime strategy cooperation, maritime security, infrastructure investment including shipyard and shipbuilding, research and development, as well as education.

Indonesia is the largest archipelagic country in the world. The nation comprises over 17,000 islands and vast coastline of more than 54,000 kilometers, or the second largest coastline after Canada. The indonesian waters cover nearly 70% of its territory.
Based on that background information, it is evident that maritime security and maritime development are among the Indonesian government's policy priorities.

President Joko Widodo (popular as Jokowi) during the East Asia Summit 2014 has introduced his vision for Indonesia, namely as “the global maritime axis”. Through the development of a comprehensive maritime strategy, it is expected that the diverse challenges and problems faced by Indonesia, both regionally and globally, can be addressed. He also underlined how transformation and modernization is key in consistent program implementation.

Germany is currently largest economy in the European Union and the fourth largest in the world and regards the security of trade routes and development of cooperation as important matters. Indonesia with its strategic Malacca, Sunda and Lombok straits, all of which is navigated by most trade commodities to and from Europe, East Asia, and Southeast Asia, is priority partner for Germany and the European Union for the protection and security of free trade routes.

The target of the 2nd Germany-Indonesia Strategy Dialogue is to discuss common interests and possible fields of cooperation and coordination on maritime security.

The two-day event began with a closed workshop on 5 November, involving 35 experts (government officers, military and security experts, academics) from both countries. On 6 November the event was opened for wider audience, both local and international.
The closed workshop that took place on 5 November discussed the topic of “Maritime Security Cooperation“ and “Continental and Archipelagic States: Experiences in Developing Sea Power“. The limited circle of participants provided an opportunity to express opinion and share experience openly and delibate on certain points in detail. The dialogue has uncovered various opportunity for cooperation with Germany and the European Union, especially on the implementation of the wide-ranging target of the “Indonesia Global Maritime Fulcrum“ project.

Both countries, Germany and Indonesia often stated the area of possible cooperation include the following: issues on technological advancement, tangible research projects or solutions to threats arising from piracy and transnational terrorism. Cooperation area may also include other actions carried out by Indonesia and EU member states for “marine environmental protection”

With regard to challenges in the maritime domain, many have spoken about the need to raise such topic to the UN based on a coordinated effort, having understood that Germany and Indonesia will both sit in the UN Security Council for one year during 2019 to 2020. 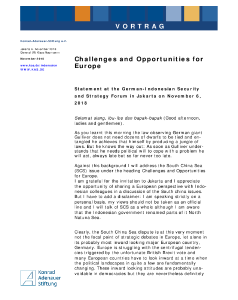