With the aim of bringing together experts and decision-makers from Germany and Indonesia for a dialogue on common security interests and strategic challenges for the future, every year KAS Indonesia organizes the Germany-Indonesia Strategic Dialogue in Jakarta in cooperation with the Center for Strategic and International Studies (CSIS).
August 1, 2019 Ordering Information 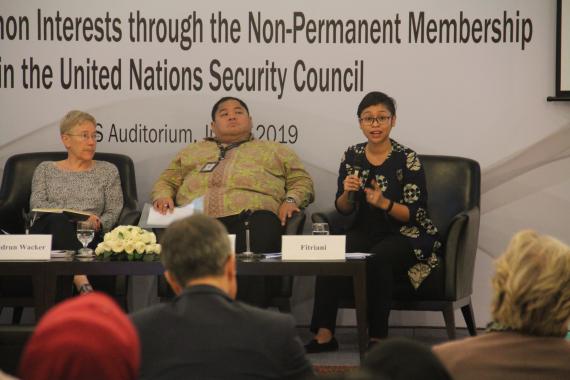 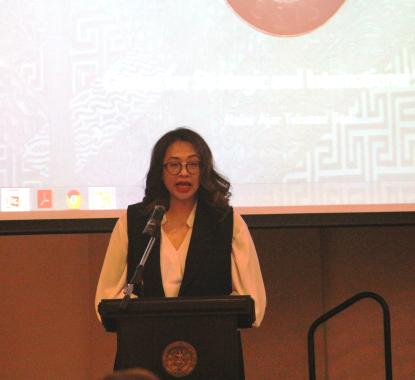 The keynote speech to begin of the event was held by the Director for International Security and Disarment of the Indonesian Foreign Ministry, Mrs. Grata Endah Werdaningtyas. 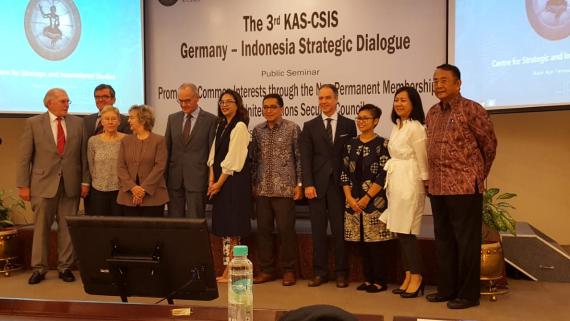 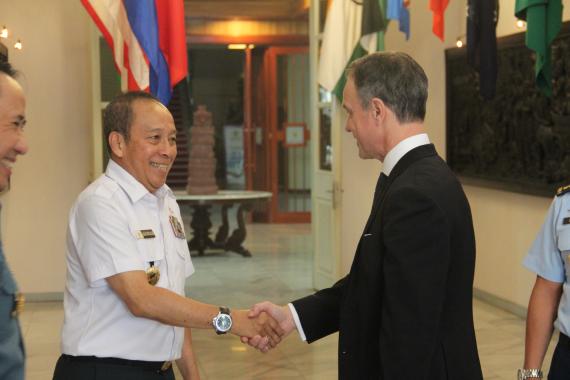 Second day of the event at the National Resilience Council Indonesia (Lemhannas). The German group, represented by the Director of the KAS office in Indonesia, Mr. Jan Senkyr (right in the picture), was received by the Governor of Lemhannas, Lieutenant-General (Ret.) Agus Widjojo (left in the picture). 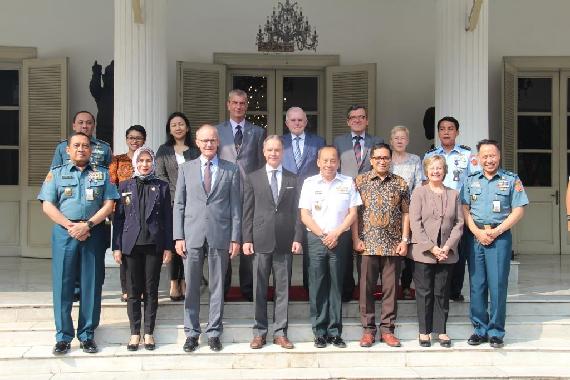 The 3rd German-Indonesian Strategic Dialogue took place on 01. and 02. July 2019 and focused on the topic "Promoting common interests as non-permanent members of the UN Security Council".

In June 2018, Germany and Indonesia were elected as non-permanent members of the United Nations Security Council for the period 2019/2020. This will give both countries an important responsibility for peace and security in the world. The UN Security Council, with its five permanent and ten non-permanent members elected for two years, is the only body that can make decisions that are binding under international law.

Although Germany and Indonesia differ in their geographic, cultural, historical and political background, there are factors of commonality: both countries are great democracies; they play in their respective regions (Germany-EU, Indonesia-ASEAN) an important political, economic and security role and both are committed to the principles of multilateralism, international law and international cooperation.

Target of the 3rd German-Indonesian Strategy Dialogue was to discuss about issues and challenges which could be interesting for a common approach or concerted initiatives in the UN Security Council.

The two-day security dialogue was opened with a public discussion event in the CSIS conference hall on July 1, 2019, attended by about 120 experts of foreign policy-makers, academics, diplomats and representatives of civil society.

The following topics were discussed in the four discussion panels:

Strengthening the role of women in security and peacekeeping missions

It is about to support women become more involved in conflict prevention and resolution as well as to better protect them from sexualized violence in conflicts. Both are important concerns of both German and Indonesian foreign, security, defense and development policies.

These include the relationships between climate change and security policy, because climatic changes are becoming a security problem for more and more states, for example, for small island states, which are exposed to rising sea levels. In addition was also discussed, the role of climate change in conflict prevention, for example in connection with the refugee crisis.

Both Germany and Indonesia are exposed to the threat of terrorism and are interested in strengthening international cooperation and coordination in the prevention and fight against terrorism and violent extremism. Both countries could promote the exchange of experienc and information as well the networking of security structures between the EU and ASEAN and coordination of joint initiatives in the Security Council.

Reform of the UN Security Council

The reform of the UN Security Council remains a core concern of the governments of both countries. The reform of the Security Council is intended to meet the following substantive requirements: Improving the representativeness, strengthening the legitimacy and increase the effectiveness. Germany is involved in the formation of the G4 Group (consisting of Germany, Brazil, India and Japan) which mutually support each other for permanent membership in the Council. However, the reform plan is given only low chances of success.

On the second day, the strategy dialogue continued as part of a closed expert workshop in the conference room of the Indonesian National Resilience Council LEMHANNAS (Lembaga Ketahanan Nasional). The Governor of Lemhannas, Lieutenant-General a. D. Agus Widjojo, in his opening speech, highlighted the importance of cooperation between Germany and Indonesia for strengthening multilateralism and international law in international politics. The following panel discussion focused on the topic of "Strengthening Peace Diplomacy and Supporting the Agenda for Nuclear Disarmament". German foreign policy, with its chairmanship of the UN Security Council, wants to give new impetus to nuclear disarmament and arms control while strengthening the Treaty on the Non-Proliferation of Nuclear Weapons (NPT). This is supported by Indonesia. Also discussed was the question of what should happen after the US has abandoned the INF and the impending failure of the Iran deal, and what role the UN Security Council could play.