Nine of the 15 cities with the highest air pollution in the world are in East Asia. Asia-Pacific’s

greenhouse emissions are increasing at a rate twice as fast as the global average. Much

of South-East Asia’s original forest cover has been destroyed, at an annual loss rate the

size of Switzerland. Asia-Pacific has the highest annual water withdrawal of all the world’s

regions. Water shortages are projected for 2025 in India, China, North and South Korea,

Cambodia, Thailand, Vietnam and the Philippines. Bangladesh could lose 17 percent of its

land area to rising seas caused by global warming, and Indian crop yields could decline by

Clearly, with such enormous environmental problems facing the region, the need for

widespread, accurate, informed and regular communication on all aspects of the environment

is crucial to mitigate these issues as much as possible.

Environmental Journalism, however, is a fairly new field. In addition to being competent

journalists, environmental reporters must also be researchers, have some scientific and

even economic knowledge to be able to accurately conduct their duties. In some states, as

we point out, journalists must also be prepared to confront vested interests, who, in some

journalism in the Asia-Pacific region. The objectives are:

• To identify the key environmental issues facing the Asia-Pacific region

• To identify and assess journalism organizations, NGOs and others involved in

• To assess the state of environmental reporting in Asia-Pacific 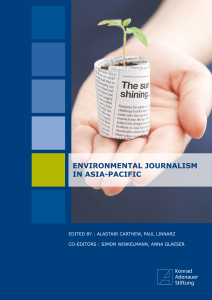