On April 21, 2015 KAS held the 2nd roundtable discussion in 2015 as a continuation of the series of roundtables that have been running since last year.
April 21, 2015

We looked at ways how the media and civil society organizations can approach the new governments in Nigeria, be it local, state, or federal. The introduction paper was presented by Dr. Otive Igbuzor, the executive director Centre-LSD, a partner organization of KAS.

Mrs. Hildegard Behrendt-Kigozi, the KAS Representative for Nigeria, congratulated Nigeria for successfully conducting the general elections in 2015 and referred to the pledges that the incoming President General Muhammadu Buhari made for his turn of office. She said that in today’s Roundtable she is looking forward on recommendations how practically CSO and the Media can assist in making this pledges become reality and put forward their own intellectual and practical contributions and advice on the many topics to the executive, legislative and presidential structures. Nigeria deserves that Government and Citizens work hand in hand to achieve the goals laid down by General Buhari for the development of all Nigerians.

He argued that Nigeria needs more of social change at this very juncture, as the social fabric of the Nigerian society has been affected. Re-orientation on social values and work ethics are seriously needed, while corporate social responsibility is also not to be neglected.

Dr. Otive suggested immediate steps that can be taken to start the change agenda. The first is to have a strategic plan, and replace the old 2020 document. He further suggested training the elected political elite on party philosophy, manifestoes and programs and that there should be a plan for coordination all the actions needed. To simplify change it could help to divide governance into four coordinating units i.e. finance and economy, social services, infrastructure, Science and technology, and Governance. As a further immediate step it would helpful having a plan for monitoring and evaluating all ministries, departments and agencies of government. A Plan for public administration reform is a big task for the government, but to succeed, it has to be done.

Finally, he challenged the media practitioners and CSOs to create awareness about the change agenda, and to organize and provide platforms for interactions on the change agenda and reminding the elected officials over their accountability to the citizens.

In their response some of the participants wished to put a searchlight on the activities and incomes of the legislators in Nigeria, to effect the change, while it was also pointed out that unless the process of recalling erring politicians is strengthened, the politicians will keep on disregarding the voice of the people, and will not take their jobs seriously.

Mrs. Francesca Edeghere on her side suggested the CSOs pick different areas of interest in the policies of the new government, and conduct monitoring and evaluation as well as sharing useful information’s and knowledge with decision makers. She also suggested that town hall meetings, as KAS has demonstrated on many occasions, can be used by the CSOs to monitor and bring together citizens and the government. While the new governments should not jettison projects from the previous governments, a whistleblower act, as suggested by General Buhari, should be passed to protect sources of information in Nigeria.

Mr. Ofi Ejembi from Cool FM on his part suggested that since election is a continuum, a fresh voters’ education should start now, to prepare the electorates ahead of 2019. In his words, voters’ education three months before elections can never be effective.

Another participant, Ms. Grace Ekpo a.k.a. Lady G of Wazobia FM suggested that media has to take up the role of mediator between the elected representatives and the people.

Ustaz Adeyemi, a Muslim cleric was grateful for this roundtable, and wished more clergies from other religions would be part of the Roundtable in future. As we all know, clerics are multipliers, and if they misinform their followers, the whole change we are talking about may not materialize. He pointed out the fact that clergies do not participate in politics is outdated, as seen in the last elections, when some clerics made political pronouncements.

The Roundtable closed with collecting written recommendations on a way forward and actions to be considered and the thanks by Mrs. Behrendt-Kigozi to the presenter Dr. Otive Igbuzor and all the participants for their great commitment and valuable contributions.

AGENDA FOR CHANGE: ROLE OF THE MEDIA AND CIVIL SOCIETY
Download 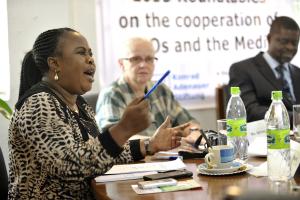 KAS-Büro, Abuja, Foto: Tobias Strahl.
Journalist Grace Ekpo was guest a the roundtable discussion organized by the Konrad-Adenauer-Foundation on how the civil society organisations can dialogue with the newly elected government in Nigeria. 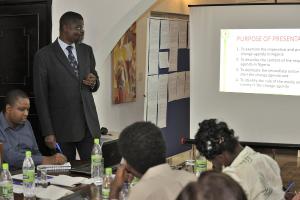 KAS-Büro, Abuja, Foto: Tobias Strahl.
Dr. Otive Igbuzor during his opening lecture at the roundtable discussion organized by the Konrad-Adenauer-Foundation on how the civil society organisations can dialogue with the newly elected government in Nigeria 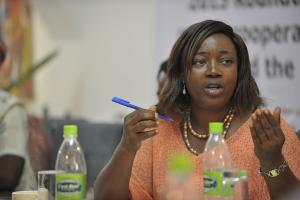 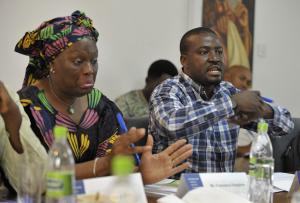