Report on the parliamentary workshop for Cross Rivers and Plateau States Houses of Assembly.

Because of its commitment to Democracy and the Rule of Law, the Konrad-Adenauer-Stiftung provides capacity building workshops for selected State Houses of Assembly (Parliaments) in Nigeria every year. This year’s seminar for the Cross Rivers and Plateau States Houses of Assembly was State Laws – Adaptation of Federal Laws at State Level. The workshop took place from the 11th to 14th of June 2013 at the Obudu Mountain Resort in Cross Rivers State.
July 18, 2013 Ordering Information 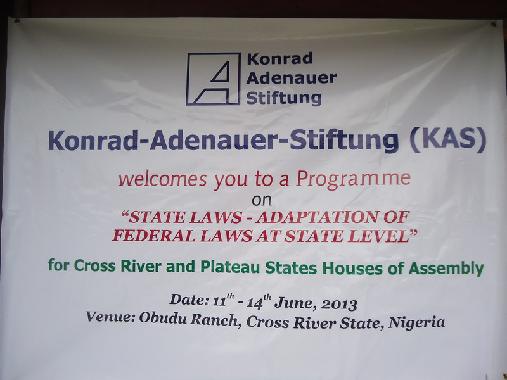 The Confluence of Federal and State Laws in Nigeria: a Panacea for Sustainable Development

Participants at the workshop/Teilnehmer des Workshops

The aim of the workshop is to enable interaction and exchange of experiences between different State Houses of Assembly as well as to increase knowledge towards various matters.

Almost all members from the two State Houses of Assembly took part in the two-day workshop, during which nine topics on relevant issues were presented and discussed.

Hon. Larry Odeh also encouraged the members of the two houses of Assembly and asked that they engage themselves in discussions and suggestions for solutions during the course of the workshop, pointing out that one way to improve the performance of legislatives was through continuous learning.

The Country Representative of the Konrad-Adenauer-Stiftung, Mrs. Hildegard Behrendt-Kigozi, urged the participating members of the houses of assembly to actively participate in the discussions, take vital knowledge back to their states and improve the situations of their various electorates. Mrs. Kigozi affirmed that the KAS is poised to support in strengthening the capacity of the legislative arm in Nigeria, because it is an important aspect of a democratic society.

The Confluence of Federal and State Laws in Nigeria: a Panacea for Sustainable Development was the first topic. which revealed that the members of the houses of Assembly face challenges in enacting some favourable laws in their states. The system of constriction which is part of the constitution does not permit state law makers to decide on specifically needed laws in their respective states.

There is the need that power or self-governing responsibilities are given to the states to address the current problems. Civil Society organizations could sometimes act as pressure groups in order for governments to act faster on important issues for the society.

The two houses of Assembly presented the laws of the last two years. Through group works, recommendations were outlined and steps to be taken for further development noted.

Participants in the workshop were further working on vital topics such as Budget Trafficking,

Ethics in Governance, possibilities of legislators remaining relevant after leaving the parliament, Leadership and Elections and the Creation of a business enabling environment in a state.

At the end of the two-day workshop, the participating parliamentarians and principal officers of the houses of assembly expressed their gratitude to KAS for the organization of the workshop and asked that the KAS continues in its endeavours in capacity building for parliamentarians in Nigeria.