As a follow up to the previous round table on Ethics and Violence in electoral processes in Nigeria, the Konrad-Adenauer-Stiftung organized a seminar on Ethics, Violence and Civic Education System in Nigeria. The event took place on the 6th of June 2013 at the Rockview Royale Hotel in Abuja.
June 28, 2013 Ordering Information

Civic education remains an important means of teaching citizens about the organizational structure and constitution of their country. At the same time it informs about the rights, duties and responsibilities of every individual and the Government and its Institutions at every level.

The objective of the workshop was to lay down why, how and by whom civic education can be brought to Nigerians to enable them understand the setting of the country and actively participate in ensuring a brighter future. Policy makers, representatives of faith based organizations, as well as NGOs who are active in the field convened together to identify ways forward.

In her opening remarks, the country representative of the Konrad-Adenauer-Stiftung, Mrs. Hildegard Behrendt-Kigozi, underlined the importance of core ethics as the basis of all societies. She stated that civic education should be a primary concern as it is the foundation of every democratic state. As part of the opening remarks, Mr. Isa Ozi Salami of the Independent Corrupt Practices and Other Related Offences Commission (ICPC), pointed out that civic education for Nigerians is part of the mandate by the Federal Government to the ICPC. He emphasized that the job of the ICPC is not just to “catch criminals” but to also go underneath to discourage ideas that fuel corruption. He concluded that the ICPC believes totally in the dignity of the Nigerian people.

Mrs. Francesca Edeghere, the director of Trainings, Seminars and Studies at the Fellowship of Partners for the Protection of Ethics and Values (FOPPEV) gave the title presentation on Ethics, Violence and Civic Education System in Nigeria. FOPPEV works in close cooperation with the office of the Special Adviser to the President on Ethics and Values.

Mrs. Edeghere outlined the close synonymy of the Civic Education, Citizenship Education and Democratic Education. She expressed the view that Ethics, Civic Education and Violence are experiences that are imbibed and cultivated. These experiences are most often stirred from the home and further strengthened from information and experiences in the formal school, which ultimately gets consolidated in the larger society. She was of the opinion that the home, the educational system and the larger Nigerian community are the three phases to be considered in studying the effects of the presence or absence of ethics. Ultimately, she blamed the loss of ethics and values on the absence of civic education in the Nigerian educational system.

President of the International Centre of Leadership and Governance, Dr Paddy Njoku, a speaker at the workshop criticized the current situation in the country and stated that violence is a consequence of lack of ethics. He stressed the point that, ethics and values are one of the few things that differentiate human beings from animals. In his presentation, Dr. Njoku asked the legislative representatives in the workshop to push forward and enact laws that flow on the laws of ethics. Finally he pointed out the importance of holding the value of principles above privileges. As part of the contribution of the International Centre of Leadership and Governance, there is a platform on ground that trains officers in ethics and values. The ICLG has also as its objective a family target advocacy.

Rev. Fr. George Ehusani of the Lux Terra Foundation, a panelist on the issue, suggested that the government work closely with faith based organizations because no nation can survive as one corporate entity when the apparent lack of not just ethics but of values is absent.

The Role of Civil Society Organizations in addressing the issue of ethics and violence was discussed by Mr. Emmanuel Ulayi, Executive Director of Civic Duties Awareness Initiative (CIDAI). After identifying the problems on ground, he presented the various ways in which CSOs have helped to improve the situation. Improving knowledge about civic structures and democratic processes was according to him paramount in their work. Apart from various media campaigns and engagements with stake holders, Civil Society Organizations provide a link between the people and the government. As a particular endeavour of CIDAI, there is currently a “Naija Must be Great” campaign which takes civic duties education to secondary schools in the FCT.

In his presentation, the dwindling national consciousness, social harmony and patriotic zeal, the notion that the lack of civic education and patriotic orientation had led to disorientation in schools and the larger society and the rising incidences of corruption, indiscipline, disrespect for both elders and the rule of law show that it is high time to re-introduce civic education in schools.

Suggestions, Questions and contributions were made in numbers by the active participants. Most notable was Mr. Ayokunle Fagbemi, the representative of Centre for Peace Building and Socio-Economic Resources Development (CEPSERD). He advised that the government initiate pilot projects on sustainable civic education with focus on Parents Teacher Association (PTA), pupils/students, media engagement and programming.

Further recommendations and solutions were proposed by the participants. Among them was the need to identify entry points for policy-practice correlation.

More capacity should be given to human rights commissions to better empower them in carrying out their duties, this will lead to the development of a framework for the strategic networking and interfering of all stakeholders for effective and efficient civic education service delivery.

It was also deemed important by some sections of the participants to articulate a reward system for the compliance to ethical values and to support the deepening of civic education as it relates with the ethics and values of non-violence.

In her closing remarks, the country representative of KAS, Mrs. Hildegard-Behrednt-Kigozi, called on faith based organizations to work in close collaboration to reintroduce ethical values and therefore also combat the problem of violence amongst citizens. KAS would pursue the issue and campaign for civic education and the promotion of ethics and values to be brought not only to schools but also to the general public through Nigerian NGOs and the media. 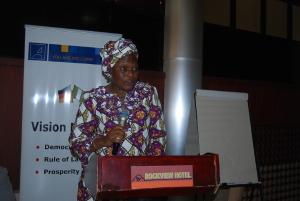 Mrs. Francesca Edeghere during her presentation 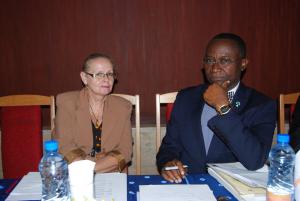 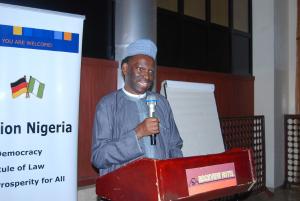