The future of UNRWA

Op-Ed by Marc Frings for the German Daily TAGESSPIEGEL

For months now, a peace plan is being discussed for which there is currently no concrete information. What goals the US government is pursuing for its "deal of the century" between Israelis and Palestinians can only be guessed at best.
August 29, 2018 Ordering Information

However, the decision to move the US Embassy from Tel Aviv to Jerusalem, which has been implemented in the meantime, together with the announcement of withholding bilateral assistance to the Palestinians, suggest that the intention is to shrink the amount of sensitive final status issues, force a diminished complexity and thus solve the Middle East conflict in mild doses. Thus, the impression is growing that the United States has been unilaterally in favor of Israeli positions and has lost its role as a neutral mediator. It also undermines the present position of the international community, by which Israelis and Palestinians themselves bear responsibility for negotiated solutions to the so-called "final status questions".


Those who seek to dissolve UNRWA and who question the refugees’ status misinterpret International Law and underestimate humanitarian consequences. UNRWA has acted since 1949 on the basis of a temporary mandate of the UN General Assembly. This mandate is renewed every three years with the consent of those countries that still host Palestinian refugees. Israel has also requested assistance from UNRWA in 1967 after occupying Gaza and the West Bank. This step has not been revoked since. Due to the fact that the fate of some 775,000 Palestinians, who fled in the wake of the first Arab Israeli war, was never settled, the numbers of those in need has increased to over five million registered refugees. This number could even be higher, as two thirds of the 12 million Palestinians worldwide are refugees.


Critics argue that it is preposterous for the Palestinian refugee status to be inherited. However, it is international standard that a refugee status is passed on to the next generation as long as the refugee status criteria remain in place. The same applies for instance to the Sahrawi refugees who fled in the 1970s and are now waiting in Mauritanian and Algerian camps for a resolution of the conflict with Morocco. UNRWA’s dissolution would, therefore, not change the inherited nature of refugee status. Comparatively, UNHCR which is the "general" refugee relief organization of the United Nations, refers to the Geneva Conventions, which are anchored in International Law and whose definition would also apply to the Palestinians. As long as International Law criteria are fulfilled, it is not possible for any state to deprive a person of their refugee status.


The fact that attractive assistance is hindering the integration of those concerned is decried by critics. UNRWA cannot be accused of this since it has no political mandate. UNRWA is mandated to provide humanitarian assistance. It provides basic and primary health care in refugee camps, delivers relief and social services, maintains infrastructure and grants micro-credits. These services are needed until the participants to the conflict reach a just solution that will achieve clarity on return or integration, on compensation or recognition of the suffering. Particularly in precarious contexts such as in Gaza, UNRWA remains one of the last anchors for hope and for strengthening people’s resilience.


From a humanitarian perspective, this is a head-on attack on an already shaky house of cards. UNRWA relies on voluntary contributions from the international community, which is why the relief organization is chronically underfunded. This is particularly astounding in Gaza, where 1.3 million people hold refugee status. The densely populated area has in recent years been brought to the brink of collapse. The reasons for this are the Egyptian-Israeli blockade, the Fatah-led Palestinian Authority's sanctions policy, Hamas' poor governance and the slow pace of reconstruction of the coastal strip. Clean groundwater is not available; the power supply is less than six hours a day and unemployment is now at 49 percent. UNRWA is singlehandedly stabilizing the situation by paying out regular salaries to some 13,000 local staff, most of whom work in schools. It ensures that 270,000 children receive formal education and that the public health sector is not overburdened. An aggravated financial situation would not only tilt the situation in Gaza. Israel would be directly impacted too. Epidemics would be difficult to prevent and protests, such as we have witnessed since the end of March, would become more radical. UNRWA has no substitute in Gaza, as no other organization would be able to take over at short notice the operation of 275 schools and over 20 health centers and continue with the same vigor.


Reliability is paramount, when it comes to the future of UNRWA. It could well be that the US has shifted its priorities and must therefore make savings using resources allocated otherwise to Palestinians. But so far, the US government has left the question open as to how to solve the conflict in conjunction with what was offered for signature to politicians Mahmud Abbas and Shimon Peres in September 1993 in the Rose Garden of the White House. At the moment, there is no longer a majority among Israelis and Palestinians for the idea of a two-state solution, as it has been envisioned at that time in the framework of the Oslo Accords. Among young Palestinians, who make up almost two-thirds of the population in the occupied territories, there is no longer any talk of their own separate state. For those who do not have any memory of the optimistic beginnings of the 1990s, what matters is living in human dignity regardless whether this materializes under the Israeli or Palestinian (or any other) flag. However, in order to be able to rekindle the belief in the two-state solution, the US monopoly on mediation in the Israeli-Palestinian conflict has to be questioned in light of the current situation. Otherwise, more destructive prospects will be let loose. Even among Palestinians there are people who sympathize with dissolving UNRWA in order to remind Israel, as occupying power, of its obligations under International Law to take charge of the 2.1 million refugees in Gaza and the West Bank.


Washington's demand that the rich Gulf States should become more involved cannot be an alternative. Walking along Gaza’s promenade today one can witness the influence of the Emirate of Qatar. Qatar is considered a central player contributing to the reconstruction of the war-torn Gaza Strip and has, therefore, political leverage. Doha continues to firmly support Hamas. A multilateral approach is necessary in order to remind the US of its own mediation strategy (and the Europeans of having a historical responsibility for the development of their southern neighborhood). This approach should engage the Middle East Quartet and the central actors in the region - Egypt, Jordan, Saudi Arabia and the United Arab Emirates by bringing them all together to jointly negotiate with Israelis and Palestinians on a regional Israeli-Arab peace plan. Only then will it be possible at best to discuss the refugee issue in a rational way. Surveys conducted among those afflicted indicate that actually only a minority would want to return to the current territory of Israel, while a majority prefers integration in their host countries.


This op-ed was first published online on 29 August 2018. Please go to causa.tagesspiegel.de for the original text. 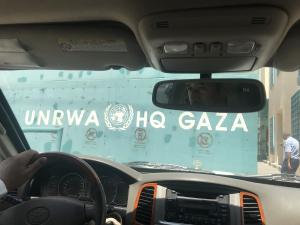