Reconciliation in South Africa - a showcase for people in Palestine?

A series of Legal Encounters in the Westbank and the Gaza-Strip on the topic of what people in Palestine could learn from the reconciliation process in South Africa.
October 14 - 16, 2014 10:00 - 12:00 Clock

The Konrad-Adenauer-Foundation and its partner the Institute of Law at Birzeit University held a series of legal encounters in Gaza and the West Bank from October 14 to 16.

We were proud to welcome Jan Hofmeyr, head of the Policy and Analysis Programme at the Institute of Justice and Reconciliation (Cape Town, South Africa) as our designated guest. The thematic focus of the encounters was therefore on possible lessons for the Palestinians from the successful reconciliation process that took place in South Africa after the abolishment of the apartheid system.

Both encounters were received very well and lively discussions arose with the 25 participants in Gaza and roughly 45 participants at Birzeit University. Jan Hofmeyr gave the keynote speeches in which he provided a brief historical overview of the reconciliation process in South Africa as well as his personal analysis of situation in the Palestinian Territories and what lessons from South Africa could be valuable to the Palestinians.

Hofmeyr emphasized that the two cases cannot be easily compared because – other than in South Africa – the situation in the Palestinian Territories is yet to transition into one of post-conflict – internally as well as externally.

Therefore, the first step in order to establish a process of transitional justice and reconciliation would be to resolve the current conflicts. Once this had been reached, the next step would be to implement institutions that guarantee a stable reconciliation process and recognize the victims and their suffering. This included that the parties involved needed to agree on a broad range of issues from reparations for the victims of human rights abuses to amnesty for perpetrators in certain cases.

Reviewing his own work at the Institute of Justice and Reconciliation critically, Hofmeyr warned the audience that the work would not be done with the establishment of the institutions and tools for transitional justice but to continuously keep the process alive for generations to come. 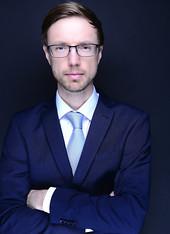 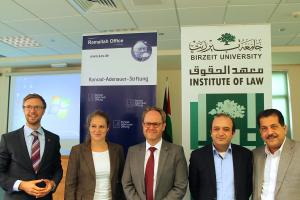