by Jörg Knocha
On April 13, 2011, the first MIFTAH (Palestinian Initiative for the Promotion of Global Dialogue and Democracy) presentation 2011 about „A Critical Reading of Print Media“ took place.
April 13, 2011 Ordering Information 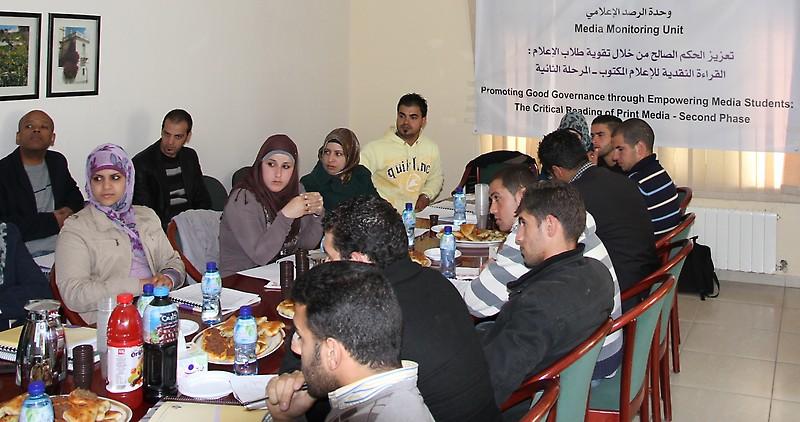 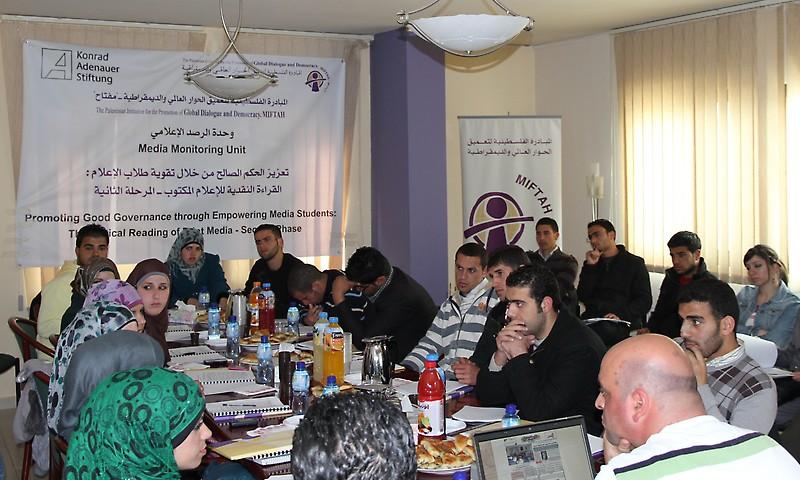 Since 2010 the Konrad-Adenauer-Stiftung (KAS) Ramallah is supporting the MIFTAH project “Promoting Good Governance through Empowering Media Students: A Critical Reading of Print Media.” Both organisations agreed to start the project by initiating a “Media Monitoring” unit to monitor the media coverage presented by the Palestinian printed media outlets. The aim is to offer media students at Palestinian universities practice-oriented presentations, workshops and training on responsible reporting that will enable the students to become critical recipients of the Palestinian media.

The first of five presentations in 2011 took place on April 13, 2011 at the offices of MIFTAH. Around 25 media students from different Palestinian universities participated. The main topics were the so-called „Palestine Papers“; around 1600 papers, ranging from September 1999 until September 2010, that are covering hundreds of meetings between Palestinians, Israelis and Americans. They were published by the satellite channel al-Jazeera in January 2011. The coverage of the three main Palestinian daily newspapers („al-Quds“, „al-Ayyam“ and „al-Hayat al-Jadida“) within the first three days after publication were analyzed.

The dynamic of the presentation was in part shaped by the attendance of several representatives of the above-mentioned newspapers. They faced a barrage of criticism because all newspapers showed serious deficiencies in their coverage. On the first day the subject was barely mentioned. One guest justified this with the late release of the papers the day before and the availability of only one source (al-Jazeera). But in the following days too the actual content of the “Papers” was hardly a topic. Even worse, the content was replaced by official statements from the Palestinian Authority. Other opinions, for example of Hamas, were to a large extent ignored. Furthermore, al-Jazeera was attacked in an undifferentiated way. Only a few articles dealt with the subject adequately.

At the end, the students agreed that much progress is needed, especially in the field of independent coverage. Even though many journalists are well trained, critical opinions are often oppressed inside the newspapers offices. Therefore, self-censorship is one of the decisive weaknesses of the Palestinian media. The decision-making inside the editorial boards has to be reformed. It is also dubious that certain leading representatives of the newspapers have no journalistic background but instead maintain close contacts with politicians of the highest echelon. This field, the nonpartisan and discriminating work of journalists, is one of the core topics of the cooperation between KAS Ramallah and MIFTAH.