Palestine in a Changing Region

International conference at Birzeit University explains the geopolitical rifts and agreements shaping the Middle East and its effects on the Palestine question
May 14, 2018 Ordering Information 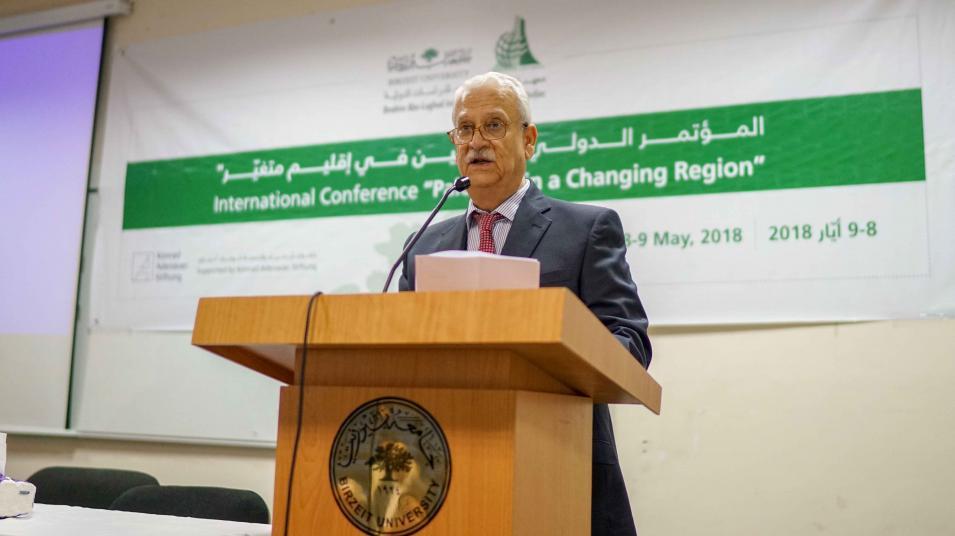 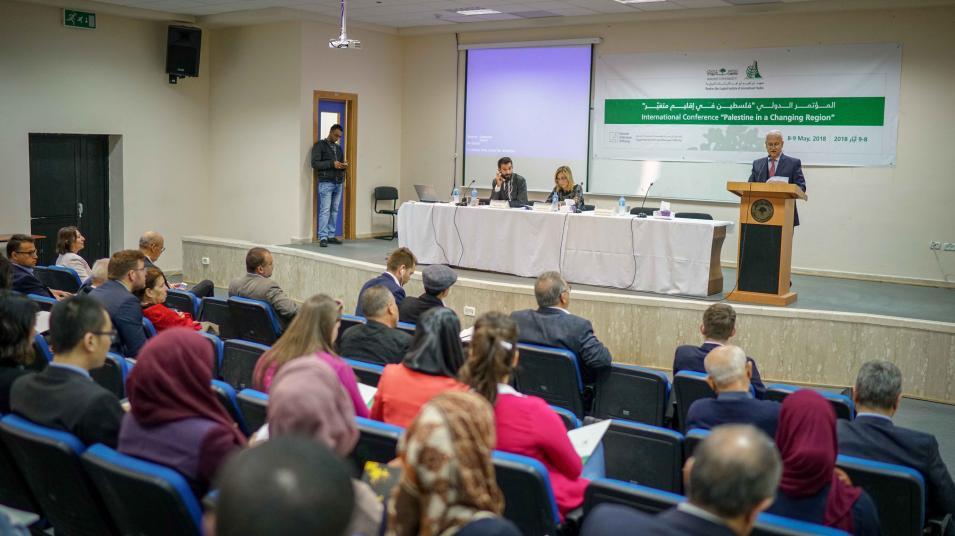 “The ongoing events in Middle-Eastern countries, from revolutions to interventions, make it difficult to ascertain the dramatic and strategic changes that affect the region,” said President of Birzeit University Dr. Abdullatif Abuhijleh in his welcoming remarks at the “Palestine in a Changing Region” conference, held on May 8 – 9, 2018 on Birzeit University’s campus.

The conference, organized by the Ibrahim Abu-Lughod Institute of International Studies (IALIIS) in cooperation with the Konrad-Adenauer-Stiftung (KAS), featured international professors and experts on political science, international relations, and geopolitics, who explored the shifting dynamics of the Middle East and the effect of major actors on the stability of the region.

“Within all these changes,” added Abuhijleh, “the region is undergoing a struggle for power, which is not limited to Arab countries only, but has also expanded to neighboring countries. Turkey and Iran, for example, are vying for a leading role in the region, and this is evident from their proxy interventions in Syria and Yemen, and in the Palestinian-Israeli conflict.”

Abuhijleh further remarked that the region is witnessing rapid, continuous changes, which make the term “regional system” difficult to apply to the area. A better-fitting term, he noted, would be “regional disruption.” As such, he pointed, all of Palestine’s regionally-viable options become extremely challenging to pursue.

“Change has to come to the area as a whole, not only in Palestine; however, Palestinians can play a major role in bringing about change in the region,” said Frings.

Lourdes Habash, director of the Ibrahim Abu-Lughod Institute of International Studies mentioned that the conference coincides with the 20thanniversary of the institute’s establishment.

“The institute’s activities and events became spaces for constructive dialogue and environments where academics can exchange ideas on the most pressing Arab and global issues and concerns. Since its establishment, the institute adopted an impartial stance when addressing grand issues that affect the daily lives of Palestinians,” commented Habash.

Noting the naming of the conference, Habash explained that the institute takes great interest in matters that pertain to Palestine and its people, especially in light of the gravity of the recent events that have stormed the area.

The conference comprised four sessions over two days. The first session, entitled “Great Powers in the Region: Interests and Interventions,” was moderated by Ghada Madbouh, a professor of political science at Birzeit University, and featured Timothy Mitchell, a professor of Middle Eastern studies at Columbia University, who discussed “Changes in US Foreign Policy towards the Middle East”; Leonid Issaev, an associate professor in the Department for Political Science at the National Research University Higher School of Economics, who explored “Russian Foreign Policy towards Middle East: Challenges and Opportunities”; and Dimitris Bouris, a professor of political science at the University of Amsterdam, who reviewed “The EU’s Role in the Middle East: In Quest for Relevance.”

The second session of the conference, entitled “Internal Perceptions of the Region: Non-Arab Perspectives,” was moderated by Habash, and featured presentations by Luciano Zaccara, a professor of Gulf politics in the Gulf Studies Center at Qatar University – via videoconference – whose presentation revolved around “The Region from an Iranian Perspective: Sectarianism and Interests”; Mustafa Aydin, a professor of International Relations at Kadir Has University and president of the International Relations Council of Turkey, who gave an overview on “The Region from a Turkish Perspective: Ambitions and Obstacles; and Hunaida Ghanem, the general director of the Palestinian Forum of Israeli Studies – known as MADAR – who investigated “The Region from an Israeli Perspective: The Far-Right and Deals of the Compromise.”

The second day of the symposium featured the final two sessions. The first, entitled “A Troubled Arab Region,” was chaired by George Giacaman, a professor of philosophy and cultural studies at Birzeit University, and included discussion of papers by Gilbert Achcar, a professor of development studies and international relations at SOAS University of London – via videoconference – whose paper was entitled “The New ‘Arab Cold War’ and the Gulf Conflict towards the ‘Arab Spring’”; Ali Jarbawi, a professor of political science and director of the Master’s Program in International Studies at Birzeit University, who presented his paper, “A Troubled Arab Region; and Raf Sanchez, the Middle East correspondent for the Daily Telegraph Newspaper, whose paper highlighted “The Arab Region Conflicts: Shaping the Map.”

The fourth and final session of the conference was a roundtable discussion entitled “Palestine in a Changing Region: What to do?” and featured Nabeel Kassis, director general of the Palestine Economy Policy Research Institute (MAS); Khaled Hroub, a professor of Middle Eastern studies at Northwestern University in Qatar; Jamil Hilal, an independent Palestinian sociologist and writer; Ibrahim Abrash, a professor of political science at Al-Azhar University; and Nour Odeh, a media professional and communications consultant.

Palestine in a Changing Region 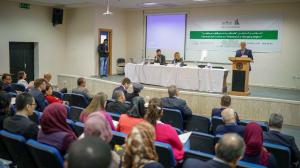