The Institute of Law organized on Wednesday, 8 June 2011 at Birzeit University a legal encounter with funding from Konrad Adenauer Stiftung. Judge Raed Asfour and Mr. Abdelkarim Daraghma, Director General of the Directorate of Labour Inspection and Work Safety at the Ministry of Labour, participated in this meeting, which was attended by representatives of a number of interested governmental and nongovernmental organizations.
June 16, 2011 Ordering Information

The encounter was launched by Mr. Fayez Bkeirat, Head of the Legislative Support Unit at the Institute of Law who welcomed the audience and explained the importance of handling labour conflicts and of setting specialized labour justice at national level. He explained it has a significant impact on a large segment of the society and helps achieve the balance between the two sides of the production.

Judge Raed Asfour inaugurated the discussion with a presentation on specialized labour justice and reiterated its importance in the Palestinian context. He commended the decision made by the Higher Judicial Council to nominate judges to adjudicate in labour conflicts. He explained that this decision is a stepping stone on the right path. He also said it is important to consider the other steps to follow the decision by all stakeholders and official and unofficial organizations in order to raise legal awareness on labour legislation and justice.

He added that the creation of labour tribunals requires a legislation to regulate it and reiterated the importance of filling in the legal gaps in the effective Palestinian Labour Law. He explained that after a pilot enforcement of the law over the past years, some articles appeared to be un-implementable and they require a review of the legislative system in order to achieve the ultimate goal of justice and un-delayed adjudication of labour conflicts.

On the other hand, Mr. Abdelkareem Daraghma stressed in his speech on the importance of specialized labour justice and commended the decision of the Higher Judicial Council to nominate judges to litigate on Labour cases. He confirmed that expedient litigation of labour conflicts was the most important factor behind making this decision pointing out that this step requires consolidation of all efforts to succeed.

He confirmed that the Labour Law grants the Ministry of Labour the right to monitor its enforcement in terms of work conditions and circumstances. In undertaking this role, the Ministry could detect a number of legal gaps in the enforcement of the law after it was issued and applied in practice. He added the Law grants powers to work inspectors, but such powers require tools to produce the legal effects that employers must comply with especially with the existence of numerous labour conflicts.

Interventions and recommendations in the end of the meeting focused on the importance of specialized labour justice and the necessary legislative intervention to cover the whole picture. It is also necessary to raise awareness of the labour law at both sides of the production and to accelerate litigation of labour conflicts to serve both parties. It is therefore necessary to have specialized judges to consider labour conflicts. 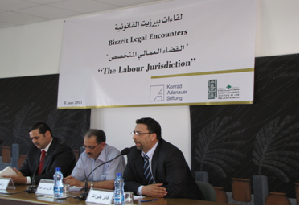