Miftah Releases Publication on the Performance of the Palestinian Legislative Council

The Palestinian Initiative for the Promotion of Global Dialogue and Democracy (Miftah) in cooperation with KAS Ramallah published its third report on the performance of the Palestinian Legislative Council (PLC)
December 16, 2009 Ordering Information

The report monitors the parliamentary work of the second PLC within the period from August 2008 to October 2009. This period has been characterized by a strong political division between the West Bank and Gaza Strip, which has weakened all aspects of parliamentary life. The report comprises four sections: the first defines the nature of disagreement over the temporal and legal jurisdictions of the PLC Presidency. The second section addresses the parliamentary action taken by parliamentary groups, bloc commissions and the regular meetings in the West Bank. The third section addresses the performance of the legislative and monitoring functions of the PLC in the Gaza Strip. Finally, the fourth section presents main recommendations. 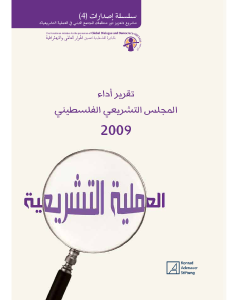