by Malak Mansour
A large majority rejects the Social Security Law, two-thirds are dissatisfied with the reconciliation government, and almost two-thirds demand the resignation of Palestinian President Mahmoud Abbas. In the meantime, three quarters of Palestinians welcome the role played by Qatar in the Gaza Strip. The last Palestinian-Israeli armed confrontations in the Gaza Strip and in the West Bank significantly increased the popularity of Hamas and the support for an armed intifada and decreased the support for diplomacy and negotiations. Indeed, three quarters demand Palestine rejects the US President Donald Trump's peace plan, considering it a failure to meet any basic needs of the Palestinian people.
December 18, 2018 Ordering Information

These are the results of the latest poll conducted by the Palestinian Center for Policy and Survey Research (PSR) in the West Bank and the Gaza Strip between 12-16 December 2018.

The period before the conduct of the fieldwork of the poll witnessed several developments including the intensification of popular opposition to the Social Security Law, the failure of reconciliation efforts, the release of a report indicating that President Abbas intends to dissolve the Palestinian Legislative Council (PLC), the transfer of the Qatari funds to Israel to cover the cost of fuel for the Gaza power station, and the direct Qatari payment to Gazan employees of the former Hamas government. Also, it was revealed during this period that some Palestinians have sold property to Israeli Jews in East Jerusalem and other places in the West Bank.

Despite the efforts to calm conditions in the Gaza Strip, this period witnessed a serious escalation in violence between Hamas and Israel. The US Administration announced its intention to make public its own plan for Palestinian-Israeli peace. The Israeli Prime Minister Benjamin Netanyahu visited Oman and several Israeli ministers visited the United Arab Emirates.

Finally, a major violent escalation took place in the West Bank during the period of the fieldwork for this poll. This poll addresses all these issues and covers other matters such as parliamentary and presidential elections, general conditions in the Palestinian territories, the peace process and the future possible directions for Palestinians in the absence of a viable process.

Total size of the sample is 1270 adults, interviewed face to face in 127 randomly selected locations. Margin of error is +/-3%. 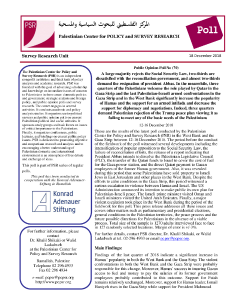