With the reunification of Germany in 1990, the world had given the
German people a second chance to return to the fold. Thus opined
the great German-American historian Fritz Stern on the fate of the
community of Euro-Atlantic nations. Three decades later, America’s
European allies have the fortuitous opportunity to return the favour: to
President Biden. But are they prepared to do so? On Washington’s old
terms that characterized the transatlantic relationships of the Cold War
and post-Cold War era? The Biden administration’s sincere commitment
to repair old alliances notwithstanding, it is actually America that is
giving Europe a second chance.

President Trump was maligned for abandoning America’s traditional
approach to its alliances, brazenly putting ‘America First’. But was this
isolationism, or just unilateralism? The basic premise of study is that
this nuance between these two concepts holds the key to unlocking the
transatlantic relationship: past, present and especially future. Trump’s
approach was widely misconstrued as isolationist in tenor. But America
has never been isolationist (at least not since the late 19th century).
Rather, a legacy of unilateralism is the bedrock principle that upholds
the American foreign policy tradition. This epiphany is consequential. 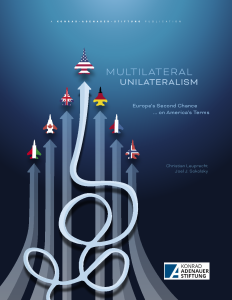