The SARS-CoV-2 virus is dangerous not so much because of the direct damage done to living cells, but because of the accompanying complications that it triggers. The overall health status of the affected body is what matters, alongside chronic diseases and susceptibilities. The impact of the pandemic on global politics is somewhat similar: the lockdown and economic disruption exacerbate the accumulated contradictions and problems. From this perspective, the pandemic hit the U.S. at a bad time in terms of both its domestic political landscape and the foreign policy it has adopted in recent years. The active yet chaotic and hazardous game with opponents and partners that Donald Trump picked as his strategy can bear fruit only in certain conditions. Achieving success requires a robust economy (in 2017–2019, the U.S. economy grew at a rate of 2%–3%), as well as readily available reserves, fast response capability, confidence and an image of success.
28. Mai 2020 Bestellinformationen

• The pandemic has highlighted numerous problems that will be constraining U.S. power in international relations. They include the expanding competition with China, soft power losses, economic challenges and growing contradictions in American society;

• The outcomes of the weakening of the U.S. and other major powers will not be chaos and disorganization, but growing internal instability, which may entail the emergence of new failed states, and the involvement of external forces in their breakdown;

• Three hypothetical scenarios look probable: a new cold war, a grand bargain and a return to soft containment. The latter seems most realistic;

• Each of these scenarios might carry costs for Eastern Europe, yet the soft containment one appears preferable. 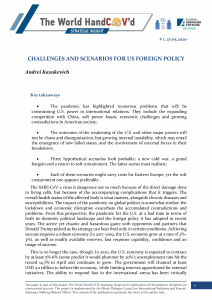