WHY THE EU IS NOT MAKING A NEW WORLD

The ongoing coronavirus pandemic has asked questions of the European Union. For some, its relative invisibility during the early phase of the pandemic confirmed its irrelevance; for others, its relevance and necessity are more obvious than ever in an increasingly insecure world. The pandemic provides an opportune moment to assess the EU’s capacity to face security challenges in an emerging global order. The EU will need to adapt quickly if it is to retain its vigour and security.
22. Juni 2020 Bestellinformationen

• Much of the criticism levelled at the EU during the pandemic assumes more supranationalism than the EU institutions possess. In matters of security and the wider world, the EU primarily functions on an intergovernmental basis – as it will continue to do so.

• The pandemic has reiterated the central role played by Germany in the bloc. Both member states and outside actors should more fully consider the form Germany’s power takes when formulating their own foreign and security policies.

• The neoliberal consensus that has undergirded the global political economy since the 1980s has been shaken to its core. It is unclear whether EU member states will be able to agree on their preferences for the future global order, limiting their capacity to influence its details. The ability to find a new consensus will be the EU’s greatest strategic dilemma in the coming years. 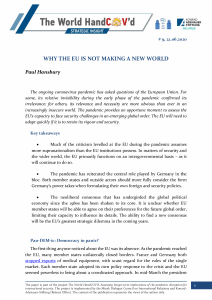