Welcome Speech to the Conference

Challenges and Opportunities for Economic Development in Bosnia and Herzegovina
25. März 2010 Bestellinformationen

It is a particular honor and pleasure for me to welcome you to our conference here in Banja Luka on the role of social and economic dialogue in the economic development of Bosnia and Herzegovina.

The organizers of this conference, the Association of Employers of Bosnia and Herzegovina and the Konrad-Adenauer-Stiftung, are delighted to have the unique opportunity to promote discussion on this particular issue before such a distinguished audience.

The reason for holding this conference is easy to explain. The global economic crisis has hit Bosnia and Herzegovina hard. This can be seen every day. Not only has GDP growth fallen steadily in comparison to previous years, the current account deficit has also widened as a consequence of the worsening terms of trade, the fall in global prices, and the slump in internal demand.

As a consequence, unemployment in Bosnia and Herzegovina has increased, and with that, the population’s dissatisfaction with the country’s situation and its political elites. Although most of these economic and social problems existed before the crisis, they are more evident today. In a country already divided on so many important issues, a growing risk of social unrest and further economic decline cannot be ruled out. Surely such a scenario would inflict further damage the country’s reputation and lead to severe consequences for Bosnia and Herzegovina’s efforts to join the European Union.

However, we should not dwell on just the negative aspects. There have been some positive developments, which I would also like to mention. As stressed in the current White Book of the Foreign Investors Council, Bosnia and Herzegovina’s overall ranking in the latest “Doing Business Report” has improved. Even if this is only a small step, it is, in my view, an enormous achievement when compared with the difficulties this country has to face on a daily basis.

But will that be enough to smooth this country’s way into the European Union. At a time when the EU is on the brink of liberalizing visa restrictions for the citizens of Bosnia and Herzegovina, this country has to prepare its economy and society for open borders. If implemented, visa liberalization will result in an influx of foreign investment, human capital, and fresh ideas from those returning home from abroad. At the same time, however, this greater freedom of movement will put greater pressure on Bosnia and Herzegovina to improve on its ability to implement laws, enforce labor standards, and boost the efficiency and productivity of its companies and industries. Visa liberalization will be only the first step in this process. The closer Bosnia and Herzegovina comes to the EU, the greater the EU’s demands on Bosnia and Herzegovina to cope with the pressures of the European market. At the moment, the country’s capacity to cope with such pressures remains low.

What needs to be done so that Bosnia and Herzegovina can successfully meet these challenges? This is the very reason why the Association of Employers and the Konrad- Adenauer-Stiftung have organized this round table. Our goal is to provide a platform where the kind of common ground needed to solve urgent economic and social problems can be developed. To achieve this, an exchange of views between all those with a stake in this country’s economy and its future is necessary. Therefore, we chose this format to ensure that a real dialogue among the participants can be established. It would be naïve to believe that one meeting alone could solve all the questions that need to be addressed. I assure you that we have no such illusions! This meeting should be seen only as a starting point. We would be pleased if this meeting were to give rise to a network for further discussion.

Last but not least, I wish to thank both our partner, the Association of Employers of Bosnia and Herzegovina, which suggested the idea behind this project, as well as the team at the Centre for Regional Initiatives, which has done such a wonderful job in preparing this conference.

Once again, let me extend to all of you a warm welcome. Thank you for being with us today.

Thank you for your attention. 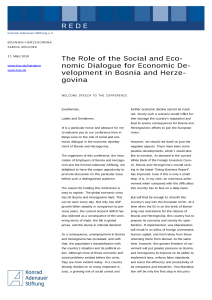