Globalisation is connecting countries, economies and people around the globe. We all cherish and benefit from cheap goods, global tourism, cultural exchange – all linked and depending on physical and virtual strings and knots around the globe. But vulnerability of these global networks has also increased, by tradi-tional as well as by non-traditional threats: maritime terrorism, cyber attacks, climate change to name some.

In recent years developing and emerging countries have published new strategies to cope with these challenges – challenges that long for comprehensive approaches, including state actors, private enterprises and society, military and civil instruments.

The following papers analyse the aforementioned topics in the framework of evolving EU-China Relations. The studies clearly show that new efforts for cooperation between Europe and China have to be made. Afghanistan and Africa are the most challenging stages, on which China has remarkably increased its economic and political influence during the last decade.

Some of the ideas and recommendations had been discussed in two international conferences in Beijing and Hong Kong, organized by KAS Beijing and KAS Shanghai in 2011.

EU-NATO-China: Perspectives of a Developing Partnership

Anti-Piracy and Anti-Terrorism in the Indian Ocean: Operation Atalanta and Europe´s Contribution

Strategic Cooperation with Africa: The Examples of China and Europe 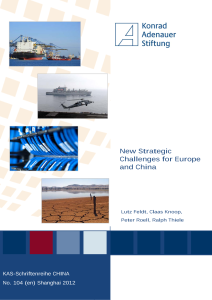