Arbitration in Democracy and Governance: The Role of Queen Mothers

The program was aimed at helping Queen Mothers deepen their skills in arbitration and the various processes involved in alternative dispute resolution.
21. März 2022 Bestellinformationen

Konrad Adenauer Foundation, Ghana in collaboration with The Queen Mothers’ Platform-Ghana organized a three-day workshop on arbitration and alternative dispute resolution for queen mothers from the 16 regions in Ghana from 14th to 16th February, 2022 at Royal Senchi Hotel in the Eastern Region. The program was aimed at helping Queen Mothers deepen their skills in arbitration and the various processes involved in alternative dispute resolution.

As part of the program, the queen mothers were introduced to the types of conflicts and the several methods of addressing conflicts. They were also exposed to how arbitration can work from a traditional point of view by highlighting the role traditional leaders can play within their respective communities as permitted by the constitution of Ghana.

The workshop was facilitated by Justice (Rtd.) Stephen Alan Brobbey, a former justice of the Supreme Court of Ghana and former Chief Justice of the Gambia, a renowned expert on traditional law and arbitration in Ghana. Justice (Rtd) Brobbey was joined by Lawyer’s Tawiah Akyea, an arbitration consultant, and Victor Brobbey, head of the legal Department, Lancaster University Ghana.

At the closing ceremony of the workshop, Prof. Samuel Bonsu, the Rector of GIMPA and Guest of Honor stated that the role of traditional leaders towards the development of Ghana is key as they help in resolving disputes in their local communities to facilitate development. Prof. Bonsu added that, GIMPA is considering to set-up a Center for Traditional Leadership that would offer the necessary research background to support the work of traditional leaders. 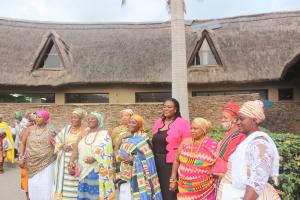 A Section of Queen Mothers' and Hon. Diana Asonaba Dapaah(Dep. AG and Dep. Min. of Justice)