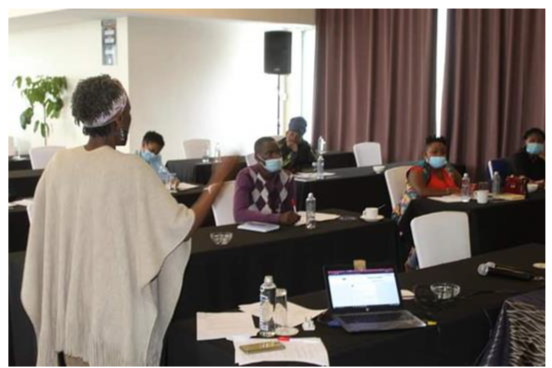 These specific activities focused on enhancing the young politicians’ skills on how to effectively communicate in the political space and use the media for political communication. One of the topics included ‘Camera appearance’ specifically how one behaves in front of the camera was emphasised using a practical approach where participants one by one recorded practical sessions in front of a live camera. This was evaluated through a peer review and final facilitators remarks which was much appreciated by the participants.

Other topics included how to write press releases, statements and how to carry oneself during press conferences. This aimed at equipping the participants with the right skill-set of how to go about dealing with the press and what would actually qualify for media attention. Politicians need to master the art of what makes news in-order to be considered for coverage. The other topic of importance was how to do public speaking and write a good speech. Public speaking as an art requires liberating the ‘mindset’ and how one conceptualizes the art of expressing oneself in public. The young politicians were urged to establish an authentic identity as public figures in local politics by auditing themselves first to pinpoint their strengths and weaknesses, then auditing their audience based on their expectations. The other key topic was speech writing. Emphasis was on using strategic persuasion tools since a good speech is one which draws the attention of the public and manages to persuade the people to think in a certain way.

Last but not least the use of social media for political communication could not be ignored.  This new form of media can be said to have both positive and negative impacts but one thing is positive for sure, it allows for more interactivity, spontaneity, Instantaneity, Accessibility, Autonomy and Anonymity. Young people are more into social media and thus it would be essential for the young politicians to tap into this opportunity in order to influence positively how young people do politics. The emphasis here was on how to leverage digital spaces to push ideologies and drive policies. One of the main takeaways was the fact that even though social media is the most convenient and cheapest branding tool available, it still can be an enabler or disabler of brands. The session delved into key issues young politicians should anticipate on digital platforms such as cyberbullying and taught ways to stay grounded. The session finalized by teaching the importance of networking with like-minded organizations and policy influencers to attain a broader reach in social media-based political activism.

Overall these skills are essential for young political leaders to be able to articulate themselves and use the tool media to amplify their voice to reach the masses. This would be for their own political millage and influence the people to practice good politics. The participants assured KAS that they will make good use of the gained skills in their journeys to politics. On the other hand, KAS looks forward to continue partnering and working with the young leaders in ensuring that they are engaging in political processes to achieve the desired political change. 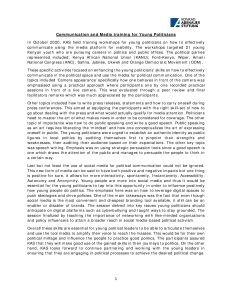 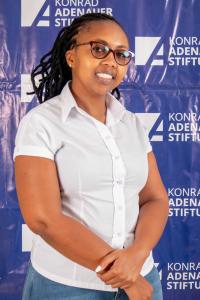