In the face of Covid-19, which regime manages the crisis better?

The article of Ms. Meryem Lakhdar entitled "In the face of Covid-19, which regime manages the crisis better?" was presented in the international conference on "Democracy, Development and Human Rights in the Context of Crisis: The Case of North Africa" that was organized by The Center for Research and Studies in the Social Sciences and the Konrad Adenauer Stiftung on December 5th and 6th, 2020 in Rabat.
24. Dezember 2021 Bestellinformationen

Facing a global pandemic that requires coordination, scientific transparency, and regular updating of data sharing, democracies appear to be better armed whereas authoritarian regimes give the impression that they hold a natural superiority through the discipline they are able to impose on their populations; while hybrid regimes seemed to manage efficiently the pandemic at the beginning but ended up deadlocked. Some democracies were unsuccessful in managing the pandemic while other dictatorships have failed in their reputation and count the victims of the Covid 19 by the thousands; whereas some democracies were criticised for the drastic restrictions imposed on their populations.

Multiple questions arise. While some are looking to answer the question whether the authoritarian or democratic regimes managed to better fight the pandemic of Coronavirus; others raise the issue of culture, claiming that societies imprinted with Confucian culture are more obedient to their rulers and therefore respect the rules more than the recalcitrant and less obedient European populations; whereas others questioned to what extent the measures adopted by North African states comply with human rights. In fact, these questions remain vague and irrelevant to the extent that everything is not political. Chernobyl had shown that dictatorships manage crises badly, except that it is not a crisis like any other, but a global humanitarian crisis exposing all regimes, all the states. Hence, the questions that impose themselves are: why did the countries of South East Asia and China – home of the pandemic – succeed in almost defeating the threat of Covid; while states such as France, Spain and the United States failed? Why in North Africa the statistics show a reduction of Covid infections, whereas medical staff and NGO’s claim the opposite? Is it because of the bad governance; the model of the regime; or does it go further than these? And to what extent the measures taken by theses states – and in particular North African – agree with democratic standards and respect human rights? The answers to these questions through his research show that there is a combination of measures and decisions that have made certain states to come out less weakened than others from the fight against the pandemic.

In the absence of in-depth academic research, our evidence will be limited to the analysis of the speeches of the political actors of the various States, statistics and the prose measures taken in order to eradicate the threat of Covid. The research will not be limited to an inquiry authoritarianism-democracy but rather to analyse the democratic regimes and authoritarian regimes among themselves in their fight against the health threat, because there is no such thing as one model of authoritarian or democratic regime. 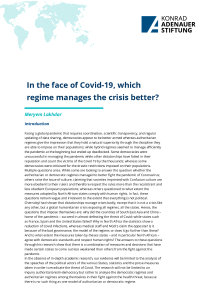 In the face of Covid-19, which regime manages the crisis better, Policy paper.pdf
Herunterladen