ISRAELI-PALESTINIAN DELEGATION TO THE USA: APPROACHES TO A SHARED ENERGY SOLUTION 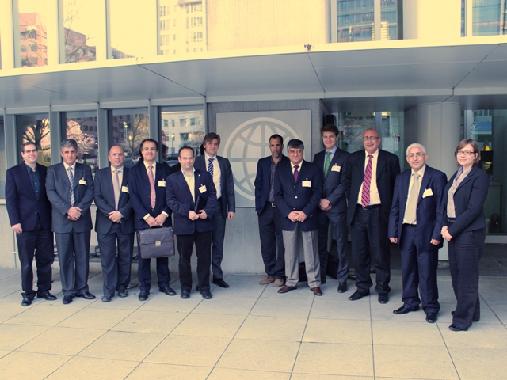 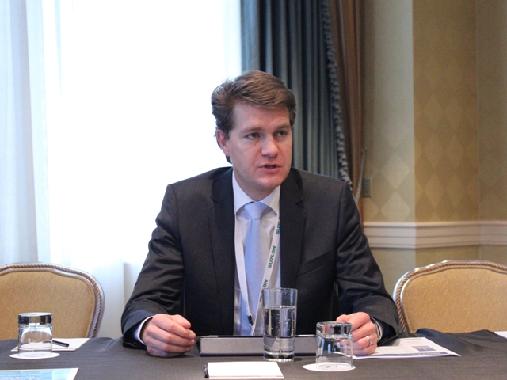 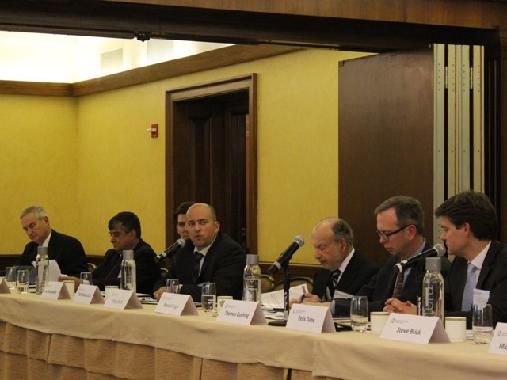 Workshop hosted by "The Chicago Council on Global Affairs", March 6, 2012 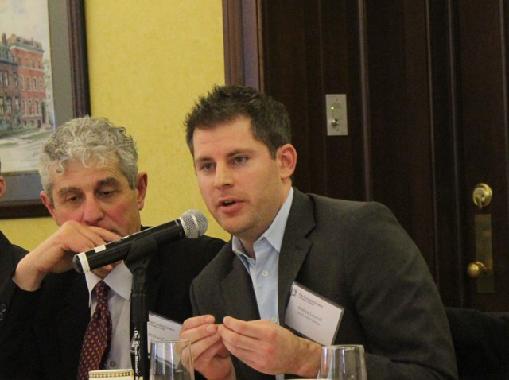 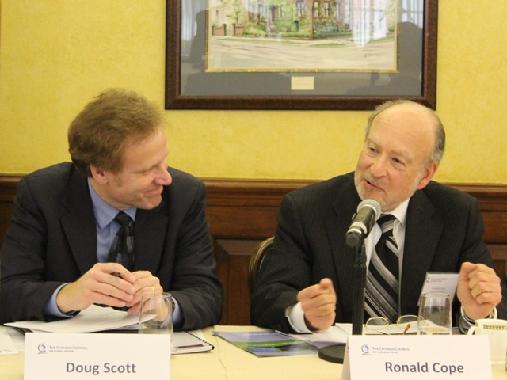 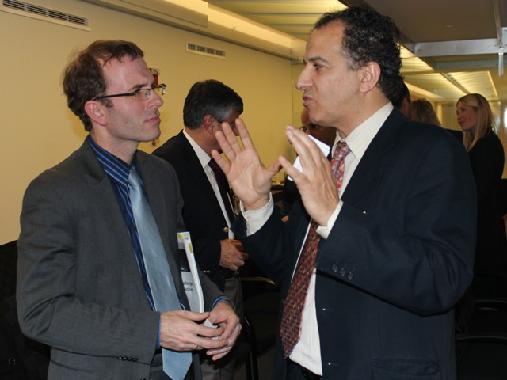 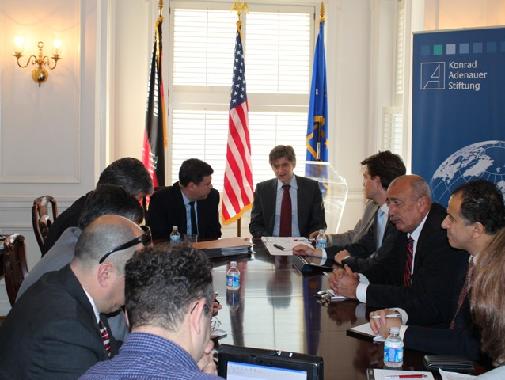 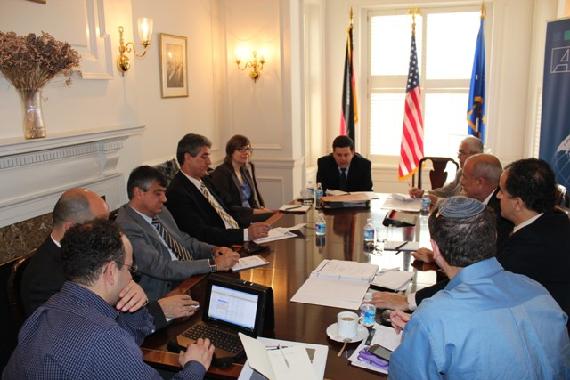 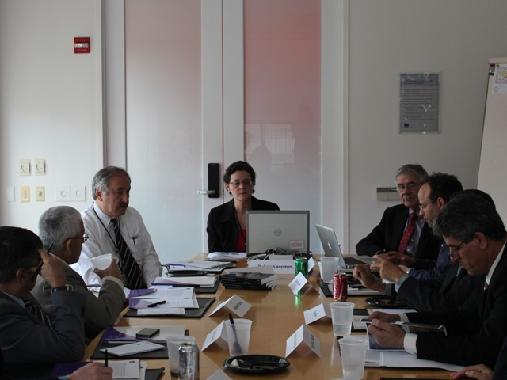 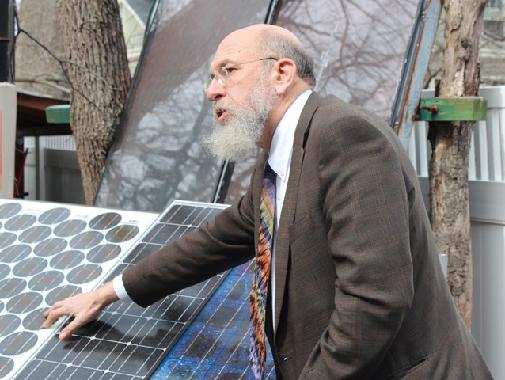 Major goal of this journey were to facilitate a know-how transfer, as well as to gain in-sights into the application possibilities of renewable energies (RE) from a technologi-cal, an economic and a legal point of view. The two KAS offices in Israel and the Pales-tinian Territories contributed to the imple-mentation of this project.

Already in fall 2010, KAS Israel had organ-ized a seminar on renewable energy with Israeli and Palestinian energy consultants and engineers in Cadenabbia, Italy. In order to build on the good spirit of that seminar and to strengthen Israeli and Palestinian capacities in the field of energy policy, the Konrad-Adenauer-Stiftung wanted to follow up on earlier ideas.

Apart from this motivation, it was important to provide an opportunity for Israelis and Palestinians to meet. The circumstances in their region are unfortunately less inviting for an open dialogue that could also focus on developing pragmatic solutions to rather technical problems. Taking a specific field as RE – which is of interest to both sides – allows to leave politics aside for a moment and to engage in outcome-oriented discussions.

Guiding points of interest throughout the study trip were first and foremost:

•The status of RE in the Unites States, the Palestinian Territories, Israel, but also Germany: What are the lessons learnt when increasing the share of renewable energy?

•The geographic dependency and applicability of renewables.

•Infrastructural, legal and financial requirements for investments in renewable energies.

•Opportunities for future coopera-tion projects in the field between Israelis and Palestinians, but even-tually also including an American and German participation.

Ambassador ret. J. D. Bindenagel, Vice President for Community, Government, and International Affairs at De Paul University in Chicago, was the first one to address the group on March 5. He expressed his joy to see this joint delegation coming to the U.S. and to Chicago in particular. At the mo-ment, the city enjoys an economic boom in the renewable energy industry. Due to the economic crisis that especially affected the automobile industry in the Great Lake area entrepreneurs sought new business ideas. The field of RE – and here above all wind energy – led to a boom in investment and employment.

Wind energy remained on the agenda the next day. The delegation took part in the American Wind Energy Association’s (AWEA) Midwest Conference. Together with American and German energy experts ap-proaches and solutions to integrated energy systems were discussed. Moreover, Amna Khan and Nicole Edmund (both AWEA representatives) engaged the group into a roundtable discussion, debating the options for wind energy in Israel and the Palestinian Territories.

What makes the situation in the Southern Levant so different from the U.S. is first of all geographic size. Many stakeholders have competing interests how land should be used. In addition, wind capacities in Israel and the Palestinian Territories – other than in the U.S. – do not reach a level where wind parks become a worthwhile invest-ment. Nevertheless, even moderate wind-levels might be worth to explore as they re-quire less land than solar parks. Therefore in particular the members of the Palestinian delegation are looking for opportunities to create a wind map of the West Bank. Only such a tool will determine which part of the Territories is suitable for wind energy facilities.

The main topic at a workshop hosted by The Chicago Council on Global Affairs was RE’s economic aspect. During the two sessions, the Israeli and Palestinian energy experts gained insights into the wind energy market in the U.S. Recent years have seen a huge demand in RE, resulting into techno-logical improvements, lower costs and pol-icy changes at the state and federal levels.

For Michael Polsky, CEO of Invenergy LLC, those developments are simply related to the fact that “the industry goes to where the business is.” This well known observa-tion is valid for large and small enterprises. Nathan Laurell, founder of New Frontier Holdings, introduced to the audience a sys-tematic approach of energy production, consumption and reuse. In that regard, es-pecially the agricultural sector has turned highly innovative.

Speakers of the second panel drew atten-tion to the implications for policy-makers if the share of RE is to increase. Different lev-els of the government are involved. Not sur-prisingly, they all got their very own inter-ests to develop renewables and to either take care of regulation or not, as Ronald Cope from the Energy and Clean Technolo-gies Group explained.

Tom Cushing’s statement centered on the recognition that fossil fuels were finite. Ac-cordingly, the Director of Strategic Partner-ships & Policy at the Delta Institute con-cluded, new solutions for traffic and trans-portation were required now. At the mo-ment, an infrastructure for alternatively fu-eled vehicles does not exist. Therefore, the automobile industry, R&D institutions and policy-makers alike are asked to step up their initiatives in that respect.

After those remarks, the members of the delegation and other participants engaged in a lively discussion on the status of RE in the U.S., Israel and the Palestinian Terri-tories. Some of the issues and challenges resemble each other: the subject of energy efficiency, the development of an adequate feed-in tariff, the question of storage and the involvement of the private business sec-tor, which can only benefit from combining economics and ecology.

The overall impression from this first part of the study trip was quite overwhelming. It was fascinating to see how much progress the United States has achieved in promoting renewable energy. The most convincing ar-gument is related to the economy: job crea-tion in small and medium enterprises and gaining a competitive advantage in new technologies. Despite all optimism, most of the delegation’s interlocutors were aware of the long way ahead and spoke of Germany’s RE policies, the state of RE facilities and the attitude of the German public as a bench-mark.

On March 7, the group departed to Wash-ington, D.C., where the first meeting took place with representatives from the World Bank Group to analyze “Regional Energy Challenges in the Middle East and Northern Africa (MENA)”. The development of renew-able energy sources is very much in line with the World Bank’s attempt to turn itself into a “Green Bank”. During the last cou-ple of years, different credit lines and other financial facilities were introduced which are targeted at increasing the RE share on a global scale and accelerating sustainable growth simultaneously. Klaus-Werner Schmitter, Senior Advisor to the Executive Director for Germany at the World Bank, emphasized that these priorities were in line with Germany’s Social Market Economy (“Soziale Marktwirtschaft”).

Ranjana Mukherjee, Acting World Bank Program Coordinator West Bank and Gaza, Carrie Farley, IFC Investment Officer, Roger Coma, World Bank Energy Special-ist, and Patricia Veevers-Carter, World Bank Sector Manager Energy and Transport, expressed all their preference for a regional approach in terms of energy production and supply. However, the ongoing upheaval throughout the MENA region, as well as po-litical barriers put many World Bank pro-jects on hold. But with regard to individual countries’ or territories’ RE development, all speakers were confident that the RE infra-structure will increase over time.

Recent studies show for example that the potential for solar energy and biogas in the West Bank looks very encouraging. Thus, it was of utmost importance to develop a smart grid in the Palestinian Territories al-lowing for a higher degree of independence from the Israeli grid, as Mr. Coma ex-plained. But this was not a decision that is solely resting with the Palestinians. In the end, the Israeli military and civil administra-tion in the West Bank had the final say. Only a change in the political situation would bring about the hoped-for advance-ment of RE generation.

This view was again expressed during a an evening discussion organized by the Ecolo-gic Institute. The Palestinian and Israeli en-ergy experts got involved into in-depth talks with strategic analysts, legal advisors and consultants from the Deutsche Gesellschaft für Internationale Zusammenarbeit (GIZ), among others, who are active in the D.C. metropolitan are.

As the Director of the Ecologic Institute, R. Andreas Kraemer, exemplified, there was “no single silver bullet in developing renew-able energy.” Although Palestinians and Is-raelis can certainly learn a lot from German experiences, an adaptation of policy and financial instruments, as well as technologi-cal solutions to local needs was inevitable. For example, the recent discovery of natural gas fields off Israel’s coast will affect the enhancement of renewables – whether for better or for worse is not predictable at the moment.

Similar questions were raised the next day when the delegation met with representa-tives from the Middle East Investment Ini-tiative (MEII), the GIZ and Sullivan & Worcester, a law firm that specializes on energy legislation and investments. Jim Pickup, the President of the MEII, intro-duced the group to the Initiative’s rationale. Since both Israel and the Palestinian Terri-tories are not only small markets, but also affected by security concerns, American in-vestors hesitate to put in capital in RE pro-jects.

What the MEII can do, though, is to offer flexible microcredit facilities and an insur-ance against losses. Especially in the Pales-tinian Territories small contributions can have a big effect. Energy for basic services such as water pumps, lighting and com-puters can be provided through RE based power plants. But again constraints put an obstacle to such necessities: 1) the Pales-tinian Authority’s lack of an energy strat-egy, 2) the ongoing Israeli occupation (the best locations for solar energy in the West Bank are in Area C) and 3) the lack of fi-nancial means.

Those topics remained paramount during the afternoon session hosted by the RAND Corporation. Together with Jim Bartis, Senior Policy Researcher, Ross Anthony, Director of the RAND Palestine Initiative, and Debra Knopman, Vice President of RAND Corporation, the group envisioned a regional cooperation strategy on en-ergy. It was important to think ahead of an independent Palestinian state that will rely on sustainable and steady energy resources to boost economic growth and to guarantee a secure human development. Apart from these implications, the energy experts also took a look at different security concerns and the effect on both economies if the au-thorities failed to provide for energy suffi-ciently. Among others, RAND studies indi-cated that the region had an impressive po-tential to exploit oil shale and to use solar energy on a far larger scale than currently in effect.

Besides seeking to enlarge existing power generation schemes or to build new power plants, it was of equal significance to run educational campaigns on energy efficiency. Scott Sklar, President of The Stella Group Ltd., invited the delegation first to see a mobile solar energy station and afterwards to tour his house, explaining his holistic ap-proach to generating, using and reusing en-ergy. The Stella Group Ltd. in cooperation with SkyBuilt Power Technology is one of the leaders in providing self-contained, rap-idly deployable, renewable and hybrid en-ergy power systems. Such installations were particularly attractive to areas difficult to access; or – in the case of the Palestinian Territories – to villages disconnected from the grid.

The revolution in the communication sector proved that mobile facilities are easier to operate and less costly to install. Many countries just skipped the stage of creating a landline network and headed directly to a mobile telecommunication network. Why should not something similar happen within the energy sector through the establish-ment of a network of local power plants that generate renewable energy? To listen to Scott Sklar’s philosophy and future plans was quite exhilarating and fascinating. The study trip of the Israeli and Palestinian en-ergy experts could not have ended more optimistically.

Although many political questions remained unsolved, the group gained new insights into technical solutions and state-of-the-art devices (e.g. solar panels, heat exchangers or windtowers). It will be crucial for the success of this project to keep the encour-aging group dynamic going, as well as to foster everyone’s commitment to cooperate in the field of renewable energy. 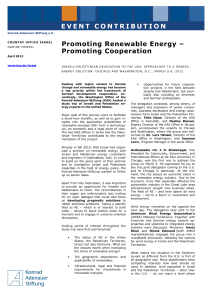