The National Human Rights Institutions (NHRIs) in the East African Community (EAC) Conference was held in Kigali, Rwanda on 27th and 28th October 2009. The Conference’s sought to achieve the following:

a)To share information on the role of NHRIs in each country in promoting and protecting human and peoples’ Rights;

b)To develop a spirit of solidarity and networking in the NHRIs in the East African Community;

c)To share information on the last Draft Bill of Rights for the EAC as well as decisions and commitments previously adopted in the EAC meetings in which NHRIs participated;

d)To find a strategy to follow up the implementation of all decisions and commitments at the State level;

e)To dissect jointly EAC plan of action and find out the role of NHRIs in its execution;

f)To develop a strategy for networking in reinforcing the role of NHRIs in EAC countries. 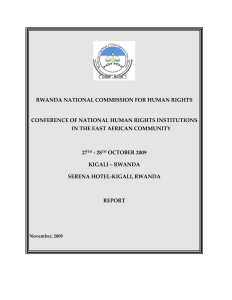