The conference’s main objective was to offer a platform to participants from various African countries to share and draw lessons and experiences from various jurisdictions both within and without the continent, on how to effectively promote and protect economic rights of the people for their own empowerment and development.
8. Oktober 2009 Bestellinformationen

The conference’s main objective was to offer a platform to participants from various African countries to share and draw lessons and experiences from various jurisdictions both within and without the continent, on how to effectively promote and protect economic rights of the people for their own empowerment and development.

As one of the most advanced economies in Africa, South Africa was chosen as the ideal venue for this conference that was graced by among other dignitaries, the Hon. Justice Pius Langa, the Chief Justice and head of the Constitutional Court of the Republic of South Africa, who delivered the key note address and Hon. Alan Winde, the Minister for Finance, Economic Development and Tourism of the Western Cape, South Africa in whose jurisdiction the conference was hosted. Hon. Justice Langa, Hon. Winde and Prof. Christian Roschmann, the Director of the Rule of Law Program in their opening remarks ably set the tone for the conference by underscoring the importance of full realisation of economic rights and economic empowerment of the African people if real development on the continent is to be achieved.

In her presentation on the relationship between the rule of law and economic development, Hon. Dr. Athalia Molokomme, the Attorney General of the Republic of Botswana argued that the latter facilitates economic development, and therefore its absence or its ineffectiveness inevitably leads to devastating consequences on the prosperity and stability of any society. She further pointed out that over-regulation and bureaucratic hurdles by the economic actors also have equally negative effects to economic development and subsequent enjoyment of economic rights by the masses. She noted that abiding by long and formalized administrative and judicial procedures in itself does not add any value unless it is justifiably meant to enhance and foster transparency and accountability.

She outlined the current situation in Botswana in regard to the organization, protection and limitation of human and economic rights. One of the points raised in this context that solicited special interest among the participants was Botswana’s approach to dealing with its mineral resources which are administered centrally by one national institution, as opposed to being administered locally by either tribal or regional leaders as is the case in other jurisdictions. The ensuing discussion dwelt on this topic with participants from Namibia and Nigeria in particular, stating that their respective countries were facing serious questions as regards the effectiveness and equitable distribution and utilisation of their natural resources for the benefit of all citizens thereby curbing against injustices as well as potential and apparent political instability.

Dr. Molokomme called for stronger and effective economic regional blocs in Africa as a means to enhancing the continent’s competitive edge in the global market.

On their part, Prof. Hartmut Hamann of the Free University of Berlin, Germany and Prof. Jean-Michel Kumbu of the University of Kinshasa in DRC making a joint presentation on the topic “Necessary Limitations to the Right to Free Enterprise as a Human Right: The European and African Perspective”, pointed out the cultural, philosophical and political roots of the concept of human rights in general and of economic rights in particular and their impact on the economic activities on the two continents. They then discussed in detail the systems of protection and restriction of economic rights currently in place in Germany, the European Union and the Democratic Republic of Congo.

In the ensuing discussions, participants pondered about the benefits and drawbacks of some of the limitations that were highlighted in the two presentations, in addition to the restrictions on economic rights which they wondered if they were indeed necessary, and if so, the extent to which they were.

Hon. Justice Ariranga Govindasamy Pillay, Judge President of the SADC Tribunal, Immediate former Chief Justice of the Republic of Mauritius and a Member of the Committee of Economic, Social and Cultural Rights, took participants through the Optional Protocol to the International Covenant on Economic, Social and Cultural Rights that was adopted by the UN General Assembly in December 2008. He highlighted the main objective of the protocol, namely giving individual citizens of State parties to the International Covenant on Economic, Social and Cultural Rights the right to challenge violations of their rights as stipulated in the Covenant. He explained the setup of the body responsible for hearing such complaints under the Optional Protocol, and gave the participants an overview of the relevant procedural and substantial rules. Special emphasis was placed on the mechanism of the so-called “test of reasonableness”, which bears similarity to a comparable mechanism in South Africa.

The passionate debate that gripped the floor after the presentation evolved around whether or not African countries need to ratify this protocol. Whereas some thought it will be beneficial especially to the ordinary citizens if states ratified this protocol, its opponents were pessimistic about its success especially in Africa if past experiences are anything to go by. Clearly a lot more remains to be done if the protocol is to be wholly embraced.

Dr. Oliver Ruppel, Director of The Human Rights and Documentation Centre, University of Namibia, presented a paper on the “Regional Economic Communities and Human Rights in East and Southern Africa”. He argued that regional economic communities could be a motor for regional development, and play a significant part in the amelioration of the protection of human rights, especially through regional judicial institutions. He nevertheless cautioned that for them to play such a positive role, the need for political goodwill and commitment on the part of the State parties, as well as relentless efforts and pressure by national and regional institution on the member states were paramount.

He cited the example of Zimbabwe as one where lack of political goodwill and commitment by a member state had made a joke of an otherwise sound decision by a regional judicial body in case of Mike Campbell and Others v The Republic of Zimbabwe SADC (T) Case No. 2/2007. In this matter, the SADC-Tribunal had ruled against the Republic of Zimbabwe over a violation of property rights under the jurisdiction of the SADC-treaty, and had ordered Zimbabwe to compensate the victim, a decision that Zimbabwe has defiantly disregarded.

The various possible outcomes of this situation, as well as their respective ramifications on the standing of SADC as a community, its tribunal and the potential it has as far as the protection of human rights is concerned, were the main areas of the discussion of this presentation.

Prof. Manfred Hinz, former Dean, Faculty of Law, University of Namibia and Professor of Law, University of Bremen, Germany, presented a paper entitled ‘60 years of Social Market Economy in Germany – Legal Sociological Observations’ in which he endeavoured to explain the socio-cultural, philosophical and historical factors that led to the development of the Social Market Economy, as well as highlighting some of the challenges and opportunities under this model. An issue of special interest was how this model was coping and operating under the current financial crisis. This has seen the implementation of huge savings programmes by the government. Prof. Hinz highlighted some of the aspects of this system which he thinks could serve as viable options worth exploring in the African context by African states.

Participants took special note of the dynamic balance between protection and restriction of economic rights under the Social Market Economy that is essentially open to constant re-definition based on the prevailing political circumstances, under the supervision of the judiciary. 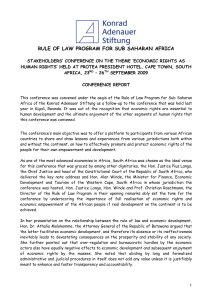