This publication gathers the results of an experts' workshop on the central security policy challenges in the Eastern Mediterranean, co-organized by ELIAMEP and the Konrad-Adenauer-Stiftung Greece in Athens in autumn 2015.
25 Απριλίου 2016 πληροφορίες παραγγελίας

The Eastern Mediterranean region has just recently come to the forefront of political concern again by being the main driver of a previously unseen flow of irregular migration to Europe. But long-prevailing issues lie behind these developments, including the continuing Syrian civil war as well as the conflict between Israel and Palestine.

Against this backdrop of interlocking developments and the overall rising complexity, ELIAMEP and the Konrad-Adenauer-Stiftung Greece organized a conference in Athens in autumn 2015 – with Greece being one of the European countries most exposed to conflictual developments in the Eastern Mediterranean and the consequences of these very developments.

The focus was put on the conflict in Syria, the situation in Iraq, the Israeli-Palestinian conflict, the threat of ISIS/and population movements. Three papers were commissioned in advance to experts with a deep knowledge of the region. Each expert was asked to present one scenario: i) pessimistic/catastrophic, ii) medium/undesired, iii) optimistic/desired. Each scenario included recommendations for stakeholders on how to prevent the first two and how to increase the likelihood of the latter scenario. 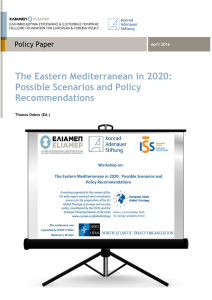