„What does successful integration mean?“

The question of ‘successful integration’ was the subject of a roundtable discussion of experts, organised by the Konrad-Adenauer-Foundation London office on 30 March 2011 where Stephan Mayer MP, member of the committee of the interior in the German Parliament, Dr. Wolfgang Götzer MP and Eric Ollerenshaw MP, PPS to Baroness Warsi, participated. The meeting concluded that the notion of ‘successful integration’ differs largely in Germany and the UK.
March 30, 2011 Ordering Information

In Germany as well as in the UK the debates about immigration and integration have intensified. With regards to integration the debates could largely be regarded as an indication of unsuccessful integration in both societies.

With the 2010 publication ‘Deutschland schafft sich ab: Wie wir unser Land aufs Spiel setzen’ the former Berlin Senator, Thilo Sarrazin ignited a heated debate in Germany, on controversial issues within the integration debate. Shortly after the publi-cation Chancellor Markel’s comment on the success of multiculturalism in Germany further fuelled the debate, dividing the foreign press into the point of whether Germany was anti-multicultural or whether Germany had gone from an ideological to a realistic approach to multiculturalism.

The British coalition government’s stricter approach to immigration, as well as Prime Minister Cameron’s speech at the Munich Security Conference in February 2011, has by the British press been described as ‘a bold speech by the Prime Minister amidst an increasingly stifling culture of political correctness’.

It is upon this background the Konrad-Adenauer-Stiftung first roundtable on successful integration took place. 25 experts from British think tanks, academics, UN and faith organisations got together with the members of parliament to discuss their views.

During the discussion, the opposites with regards to successful integration were for instance identified in the German National Integration plan which participants from the UK regarded as near to impossible to introduce as a similar measure within the UK. Further the question of German versus British identity, with which newcomers to the country and already present citizens alike were to identify, was seen as difficult from its outset. “Britishness” is largely regarded as a construct, a result of the absence of a written constitution, containing a strong sense of superiority towards other identities such as being English, Scottish, Welsh, Indian or Pakistani as they all swear allegiance to the Throne. This notion allows migrants too see themselves as ‘British anyway’ and gives the outset for integration a very different connotation when compared to the notion of ‘Germaness’. Here the recognition of the German constitution has been given a major role in the national in-tegration plan. Another difference is reflected in the way parallel societies are being perceived in Germany and the UK: Whereas parallel societies are regarded as a threat in Germany they are largely accepted in the UK. In contrast to the German side a minimised involvement of the state in the integration process is welcomed within the UK.

The roundtable format provided a suitable framework for the first encounter of British-German integration efforts. They will be continued during the course of three further meetings this and the following year and summarised in findings and recommendations. 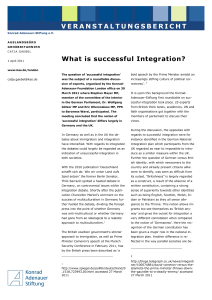