On Monday 29th June 2015, the 3rd EU-Briefing, organised by the Konrad-Adenauer-Stiftung and European Movement UK, took place at the University of Westminster in London.
July 8, 2015 Ordering Information 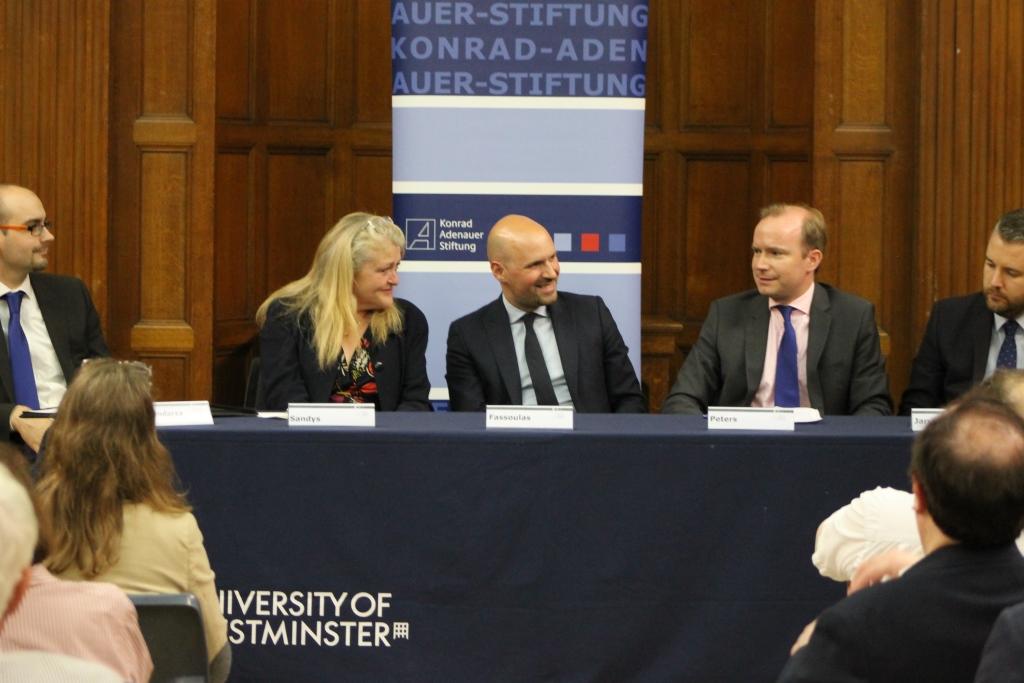 At the core of the discussion was the British EU reform agenda in relation to the planned referendum, which will determine the future EU membership of the United Kingdom. Although British Prime Minister David Cameron’s ideas only played a minor role at the directly preceding EU Council meeting in Brussels on the subject of Greece, the debate on the UK is nevertheless of the utmost interest.

The intensive discussion between British and German experts was moderated by the former European Movement chairman, Pretros Fassoulas.

Laura Sandys, new chairman of European Movement UK and former Conservative Member of Parliament, clarified the intentions behind the British reform agenda and managed to convey a positive outlook for the future of the United Kingdom. Europe, according to Sandys, has a tendency towards stagnation and UK reform could deeply alter this.

Tim Peters, chairman of the CDU in Brussels and member of staff of the secretariat of the European Parliament, raised the importance of the United Kingdom as both an economic and cultural partner. Germany and Great Britain sit closely on free trade and many of Cameron’s reform ideas are practicable, but the negotiations are not only about their contents, but also about the tone in which they are delivered.

Nicolai von Ondarza, deputy director of the EU/Europe research group, German Institute for International and Security Affairs, supported the view that agreement within European law must be found. He also particularly warned against the unrealistic expectation that treaty change might be a possibility before the end of 2017. Furthermore, he stressed that the majority of EU citizens wanted the UK to remain a member of the European Union, but not at any cost.

Finally, Alistair Jarvis, Director of Communications and External Relations at Universities UK emphasized that likewise, speedy reform shouldn’t be expected, because Cameron still has to coordinate with the other member states. He stressed that from the perspective of universities, the UK is enriched through exchange, for example, Erasmus students. Creative impulse and new ideas are promoted through Erasmus students coming to the UK and British students going to study in other European states, so that new perspectives and techniques are exchanged and new ideas can be developed.