On 11 April 2011 the Konrad Adenauer Foundation, in partnership with the Royal United Service Institute (RUSI) and Transparency International UK, concluded the last of three working group meetings on governance, counter-corruption and development in Afghanistan. The aim of the last workshop was to elaborate on recommendations set out at the preceding meeting, and to present recommendations with concrete instructions for national as well as international decision makers in Afghanistan.
April 12, 2011 Ordering Information

The transitional strategy in Afghanistan expires in 2014. The international community as well as President Hamid Karzai hope that the Afghans by then will have taken “the driver’s seat” in their country. In the light of the international community’s lack of success to introduce functioning institutions, a legal system and countering pervasive corruption in the past decade, the transitional strategy’s deadline can be regarded as an ambitious goal. According to Transparency International’s corruption perception index 2010, the country is on the second to last place together with Myanmar and scored only slightly better than Somalia. Not only large parts of the nation’s political and economical sector are subject to corruption, this also holds true with regards to Afghan-based international organisations and troops.

To take forward the complex process of transition, senior officials from the government in Afghanistan, and officials from the international community as well as troop contributing nations have discussed possible solutions for countering corruption during the first two workshops. The first session, “Looking Ahead: Next Steps, Maximising Impacts”, focused on the contribution of the British government, NATO, and the UN in the context of the mission in Afghanistan. In the second session, the experts discussed concrete steps of improving the impact of the report on the ground.

After addressing central opportunities and concerns of the mission in Afghanistan in the first two workshops, the third workshop was concerned with how to present the thoughts, and ideas, debates and recommendation in a conference report that will be presented to policy makers in Berlin, London, and Kabul. The report, to be published in May 2011, furthermore addresses decision makers in the Afghan government, the Afghan Parliament, NATO and ISAF, the leadership of other major International organizations such as the UN (UNAMA, UNDP, UNODC), the IMF, the World Bank, as well as governments with important interests in the success of the international mission in Afghanistan. 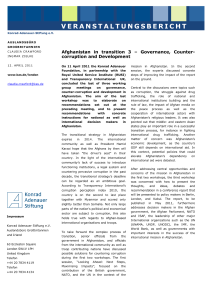