by James Hannah, Hans-Hartwig Blomeier
Given the wide-ranging impact of the global financial crisis, and the concurrent effects of the sovereign debt crisis in Europe, there has been a great deal of attention paid to the role of markets and the financial sector. As Europe moves towards a banking union, what is the view from Germany?
January 20, 2014 Ordering Information 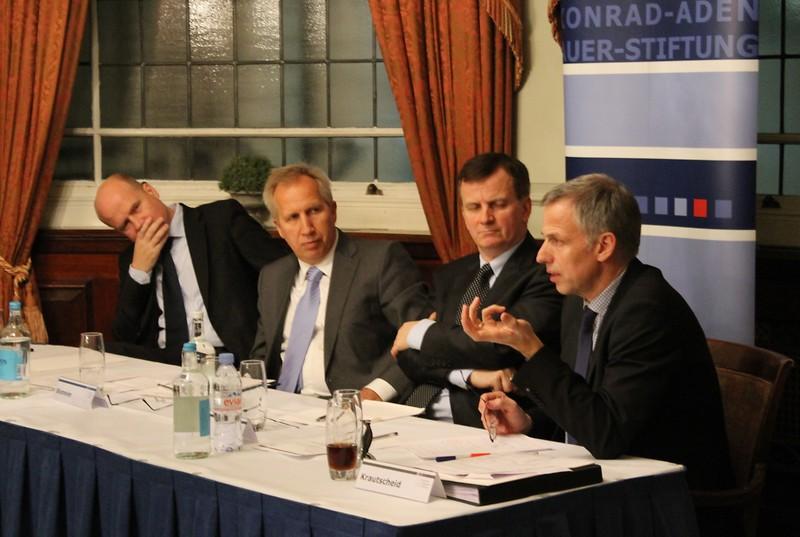 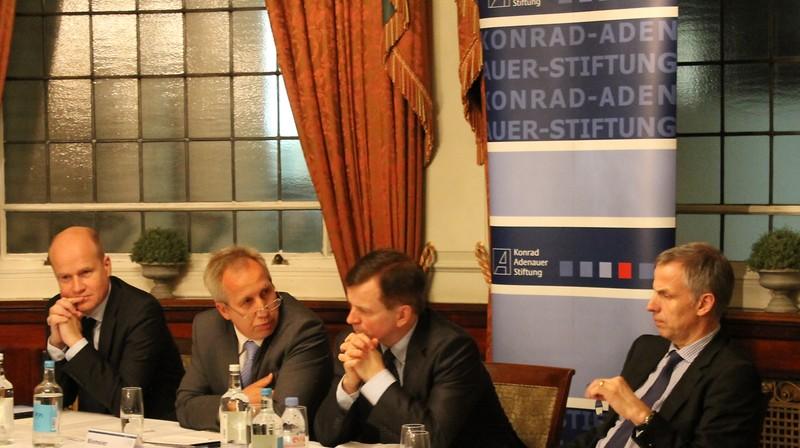 Held on the evening of 20th January 2014, the Konrad Adenauer Stiftung was proud to welcome Mr Ralph Brinkhaus MP, vice chairman of the CDU/CSU Parliamentary Group, and Mr Andreas Krautscheid, member of the Management Board of the Association of German Banks, to a discussion of finance policy in Germany and Europe.

Though wide-ranging, the subsequent debate focussed on three issues in particular:

Grand Coalition in Germany and its implications – The German federal election, on September 22nd, 2013, was a great success for Chancellor Angela Merkel, with the CDU taking roughly 42% of the vote and almost 50% of all seats in parliament. Following their failure to meet the 5 percent threshold, the CDU’s former coalition partner the Liberals (FDP) had to withdraw from cabinet and, as a result, the CDU/CSU began negotiating with the Social Democrats (SPD) over a new coalition government. Concessions were made in both directions, with the Social Democrats calling for the implementation of a nation-wide minimum wage as high as 8,50€ applicable across all sectors, while the CDU ensured no new tax hikes were implemented.

Europe's future – Germany has maintained a strong economic performance throughout the wider crisis in the Eurozone. Despite this there has been a rise of new parties, for instance the eurosceptic Alternative für Deutschland (AfD), who also missed the 5% threshold for the Bundestag but will now compete in the upcoming elections of the European Parliament. This trend towards populism, not only taking place in Germany, but also in the UK (UKIP), France (Front National) and the Netherlands (Geert Wilders) will pose a challenge in both European and domestic contexts. The improvement of the wider Eurozone’s economic outlook and the upcoming stress tests for European banks, are further issues to be addressed. Mid-term challenges include the high unemployment rate in southern Europe and the dangers this poses for the rise of extremist parties, of both left and right wings.

Financial market – With Europe moving towards a Banking Union, there will be a significant change in terms of competition and regulation. The specific structures and scope of this new infrastructure will continue to take shape throughout 2014, building on the progress of last year. The need to coordinate European level reforms with an increased capacity to respond to crises on national levels is one key aspect of this process.