by Claudia Crawford, Catja C. Gaebel
In cooperation with Business for New Europe the Konrad-Adenauer-Stiftung sought to address the prospect for further European defence cooperation, in light of the recent economic crisis and budgetary restrictions, during a panel discussion on 20 June at the Naval and Military Club in London.
June 22, 2011 Ordering Information

In cooperation with Business for New Europe the Konrad-Adenauer-Stiftung sought to address the prospect for further European defence cooperation, in light of the recent economic crisis and budgetary restrictions, during a panel discussion on 20 June at the Naval and Military Club in London. The panel consisted of Christian Schmidt MP, Parliamentary State Secretary for the German Ministry of Defence, The Rt Hon James Arbuthnot MP, Chairman of the Defence Select Committee, House of Commons, as well as Dr Florence Gaub, NATO Defence College in Rome and Tomas Valasek, Director, Centre for European Reform. The discussion was moderated by James Blitz, defence correspondent for the Financial Times.

The Anglo-French Agreement, signed on 2 November 2010, provided a milestone for this discussion which was focused on the challenges and options facing Europe’s security and defence. Both countries have agreed to pool resources and details include plans for a combined Joint Expeditionary Force, sharing of aircraft carriers, inflight refuelling, and perhaps most significantly, combined research on and virtual testing of nuclear warheads. If budgetary restrictions were the main reason behind the decision to pool resources, then questions are raised about whether serious consideration has been given to the quality of defence and military capabilities. Can quality be ignored when considering whether Europe is ready to achieve a similar agreement at the level of its institutions? What does Europe need in terms of defence, and what does it want? How can this be achieved?

Tomas Valasek, Director of Foreign Policy and Defence at the Centre for European Reform, identified four key “environmental” factors which he deemed necessary for defence cooperation in Europe to flourish: a shared sense of regional identity; trust and confidence in your partner; a level playing field for respective defence industries; Low levels of corruption.

Regarding a multilateral European defence agreement, Valasek thought the more likely and viable outcome - given the constraints provided by the criteria above - would be that of small ‘islands of cooperation’. Based both on current trends and current political reality, Mr Valasek argued that bilateral and small-numbered multilateral agreement were the best option for EU member states to achieve successful defence cooperation in Europe.

Christian Schmidt MdB, Parliamentary State Secretary for the German Ministry of Defence, emphasised the importance of political will in making decisions on defence and security. He developed the need for political consensus and agreement ahead of a mission. He expressed views in favour of developing a Franco-German ‘euro-corps’, and was convinced the EDA could play an important role as a platform for further development.

The Rt Hon James Arbuthnot MP, Chairman of the Defence Select Committee, reminded us that today’s European defence and security challenge result, ironically, from the continent’s long-lasting peace and security. Mr Arbuthnot noted that there were downsides to defence cooperation, such as a longer implementation period, a reduction in a nation’s independent capabilities and more problematically, incompatible equipment for pooling resources. Finally, he emphasised that the crux of the question could actually be summarised by two different issues: one of pooling and sharing, and the other of spending and cost. He suggested the two needed to be considered distinctly and carefully.

Florence Gaub, academic coordinator of the NATO Defence College in Rome, discussed the importance of having a clear end goal during the decision-making process of defence cooperation. Firstly, where and how to reduce expenditure must be answered by what individual nations want from their defence and security sectors. Secondly, she emphasised that Europe’s defence and security vision is ambiguous and that the tradition role of postcrisis management was now insufficient. Ms Gaub argued that this ambiguity can be related to the absence of a perceived threat to European security. Thirdly, she considered the role of politics and used the example of Libya to highlight the gap between a military mandate and political expectations in the field of defence and security.

The timeliness of the event and the topic addressed attracted nearly hundred participants. Amongst those were ambassadors and high ranking civil servants, representatives from the global media, academia, think tanks and the defence industry. In this case the format of a panel discussion gave the opportunity for engaged debate amongst panellists and the audience and is highly recommendable for future events. 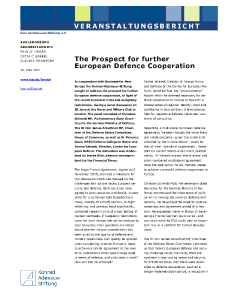