A New NATO for a New Security Environment

As NATO debates its new strategic concept the security environment into which it will launch its new strategy has changed significantly since the current NATO strategy was put into force in 1999. In Europe the population feels much safer today than at any point in recent history. People perceive military treats as something abstract that doesn’t affect their daily life. Further, due to the impact of the global financial crisis defence budgets are being cut by the majority of NATO members. The necessity of defence and security has changed since the Cold War. The chal-lenge of this security environment is partly to be found in its volatility and partly in the emerging non-traditional security threats from e.g. terrorism, proliferation of weapons of mass destruction and cyber attacks. This new security environment, in which NATO will present its new strategy on the NATO-Summit on 19 November 2010 in Lisbon, is the new environment that was subject to debate at the Konrad Adenauer Foundation seminar on 3 September 2010 in London.

During the seminar’s three sessions: ‘Global Player vs. Regional Defence Alliance’, ‘NATO’s Tools and Capabilities: Lessons Learned and Future Defence Priorities’ and ‘The Role of Partnerships in a New NATO Strategy’ a number of key concerns were analysed. These included: the major features of the changing context in which NATO functions, including an examination of the impact of the new Strategic Concept; whether NATO is to be seen as a global or a regional security institution; an analysis of the likely major security threats; the political lessons to be learned from NATO’s involvement in the wars in Iraq and Afghanistan; NATO as a membership organisation and its relationship with the EU and its partners; NATO’s relations with Russia; the requirement for structural reform in a time of grave financial stringency and reflections on NATO’s need to engage with the political class of its member nations and with public opinion in these nations more generally.

Acting in their personal capacity, the participants of the seminar shared a general understanding that:

➢ NATO is a regional organisation with a global horizon;

➢ NATO exists to defend the territory of its members, to defend citizens within it and to contribute to peace and stability in the euroatlantic environment;

➢ Article V continues to be the essence of the Alliance by providing reassurance to the allies and deterrence to others and should therefore not be altered.

➢ At the same time NATO could make broader use of consultations under Article IV;

➢ NATO must find the right way to cope with increased reluctance of member states to expeditionary operations;

➢ The strategic focus of NATO should be on threats like Weapons of Mass Destruction, international terrorism and cyber-attacks;

➢ The New Strategy should reconfirm the transatlantic link as a core function of NATO. The Alliance is the right forum for consultation and discussion about diverging perceptions on issues of common interest.

➢ In times of financial constraints there is a strong need for structural reforms. Focus should be directed towards the efficiency and quality of spending rather than quantity;

➢ NATO itself requires points of contact and interfaces for civilian soft-power institutions;

➢ Closer cooperation between the EU and NATO is necessary if they wish to exercise credible global influence and if both the EU and NATO wish to remain capable and act effectively with less duplication and over-lapping;

➢ Partnerships are a core aspect of any future NATO strategy. It includes partnerships with both sovereign states as well as international organisations;

➢ The unpredictability of Russia’s future direction remains a challenge to NATO. However, at the same time relations with Russia offer an opportunity for addressing new security challenges such as non-proliferation and for overcoming geopolitical tensions in post-Soviet Eurasia.

The participants of the seminar propose to:

➢ actively address and connect Germany, the United Kingdom and France on the defence issue in a trilateral meeting. The debate of these three countries in Europe is moving in terms of common engagement and a tripod position on defence could become a valuable tool within Europe;

➢ enhance multilateral coordination. Concrete action should be taken in the area of joint military training and exercises as well as streamlining the procurement process for military equipment;

➢ build up points of contact and interfaces for better cooperation with civilian soft-power institutions and initiate collaboration between those organisations and NATO. NATO should avoid building up own strong civilian capacity.

➢ overcome the stalemate in NATO-EU relations by encouraging Allies to engage in particular with those actors that have today essential problems with allowing both organisations to cooperate effectively. 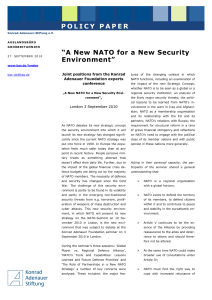 A New NATO for a New Security Environment (Pdf)
Download

A New NATO For A New Security Environment