„A New NATO for a New Security Environment“

Workshop in London 3 September 2010 (In English Only)

On 3 September 2010 the Representative Office of the Konrad Adenauer Foundation in London held a British-German expert conference on the future of NATO in a changing security environment.
September 28, 2010 Ordering Information

By the end of September 2010 Anders Fogh Rasmussen, Secretary-General of NATO, will present the draft of a new strategic concept for NATO. NATO members will then have two months two bring their views and ideas into discussion and agree on a common wording before the New Strategy is adopted on November 19th - at the NATO-Summit in Lisbon.

The New Strategy will have to consider significant changes in the worldwide security environment since the still valid strategy was adopted in 1999. Weapons of Mass Destruction and asymmetric warfare caused by international terrorism and cyber attacks have contributed to this change, NATO must find appropriate ways to respond to these threats.

This is the background upon which the British-German expert conference in London took place. The three sessions on NATO: ‘Global Player vs. Regional Defence Alliance, ‘NATO’s Tools and Capabilities: Lessons Learned and Future Defence Priorities’ as well as the session on ‘The Role of Partnerships in a New NATO Strategy” framed the analysis and reflections on a number of key concerns. Amongst those were major features of the changing context in which NATO functions, an examination of the impact of the New Strategic Concept and the role of NATO as a global or regional security institution. Part of the analysis was an attempt to identify future security threats as well as the political lessons learned from NATO’s involvement in the wars in Afghanistan and Iraq. Central topics of discussion were NATO’s relationship with the EU, other partners and NATO’s relationship with Russia. Central to this discussion was the need to further engage the UK, France and Germany in closer trilateral cooperation as the involvement of these three countries is crucial if defence and security within Europe are expected to work. Taking into account the financial constraint and requirement of structural reforms, closer trilateral collaboration was suggested to be a cost cutting measure within areas such as exercise, training and procurement. Some thinking on NATO’s need to engage with the political class as well as the need to build up points of contact and interfaces for better cooperation with civilian soft-power institutions were also concrete proposals as a result of the conference.

This conference addressed matters of major importance and concern. The experts agreed that more attention needs to be paid to NATO’s strategic planning and coordination amongst its members. The experts also recommended NATO could enhance its position and prestige by ramping up its dialogue with political leaders and with the public, on whose consent and support NATO ultimately must rely.

A joint policy paper, displaying a general understanding and recommendations for the debate on the New Strategy, was the concrete output of the discussion and will be a contribution to the debate. 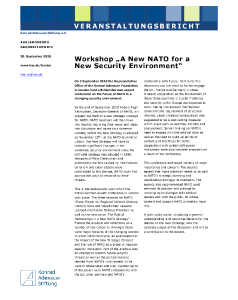 „A New NATO for a New Security Environment“ (Pdf)
Download

A New NATO For A New Security Environment