The European Roundtable 2011 addressed European Foreign Policy after the Lisbon Treaty. It brought together politicians from national parliaments as well as the European parliament, experts, academics and journalists to address current issues of concern and relevance to the European Union. With the Lisbon Treaty significant changes to the institutional structure of the EU have occurred, not least to its foreign and security policy. This is a summary from the roundtable’s five sessions.
November 21, 2011 Ordering Information

What has the Lisbon Treaty Changed?

Some of the key institutional changes after the Lisbon Treaty have been the European Council’s increased say over areas, such as foreign policy and constitutional matters and the rotating Presidency’s enhanced legislative focus. However, the institutional development has not yet come to a final end point, which largely is enhanced by the Euro zone crisis. Thus the rotating Presidency has been further marginalised, the European Commission is put further on the offensive and the role of national parliaments is being reassessed. During the discussion it was pointed out that all Euro zone members to some extend had violated rules and regulations. This would need to be addressed as all Member States, except the UK and Denmark due to their opt-outs, have to work towards adopting the Euro. It was emphasised that the Euro crisis had reintroduced the likelihood of a ‘two speed Europe’.

The need to ‘get the house in order’ was mentioned as an overall tenor. A concern was mentioned about the new institutions and the unhealthy competition developing between the Commission and the Council. A negative change observed were the occurring double structures which would be an obstacle for the elevation of the EU onto the global stage. The case of the European response to Libya was mentioned as an example of diverting approaches. Lisbon should have changed the EU to become more recognisable and more effective. The need for co-decision on internal security was mentioned as a lesson learned from Libya and a necessity for future responses.

National Parliaments and the EU Institutions: Partners or rivals?

In a rather direct viewpoint it was mentioned that national parliaments are ‘doomed’ to think national rather than European. Individual countries are successful in negotiating and pushing though their national agenda in a European context. In the same note it was reminded that Lisbon was introduced because national parliaments were loosing influence. However, on the protocol of involvement of national parliaments after Lisbon, a lack of interest of all member states was observed.

The discussion turned to the UK where the government is the main connection to EU institutions and therefore much more in the forefront in dealings with the EU when compared to the national parliament. In a remark it was stressed that British MEPs have no rights to access the House of Commons without an invitation and do not address MPs in the European Affairs Committee. A limited treaty change could, so one participant, be used to enhance the national parliamentarian protocol. Another point was made of the deficit of British MPs addressing European public opinion and public debate. It was thus suggested to further engage national MPs in such a debate in the instant of a slight treaty change.

Possible treaty changes build the centre of discussion during this session. It was suggested that with a treaty change the Euro zone would enter stronger intergovernmental relationships and that the relations between national and EU institutions potentially would be governed in intergovernmental relationships rather than between parliaments. A strong risk potential, in case of a treaty change, was that it would become an issue for the single market, the potentially most important growth factor for all member states, as it holds the risk of a hard struggle for the ten states outside the Euro zone to get access to Eurozone markets.

The new Instruments of the Lisbon Treaty for EU foreign policy

Some tangible improvement within foreign policy coordination was brought forward. Amongst these the success in ensuring the EU-Serbia joint UN resolution on Kosovo which proved that a united European approach and good coordination effort was possible. On the flipside the EU response to the Arab Spring and Libya was mentioned. Here different positions and different initiatives formed an un-unified response – also with regards to representation on the world stage and at UN level.

This thus pointed at the need for clarification of the High Representative’s role. For instance, it was questioned, should the presidency trio step in when the High Representative is unable to represent? The need of clear rules and ‘how to get about it’ if coherent foreign policy is to be achieved was emphasised. It was underlined that the predominant issue with respect of the High Representative was a personality issue. This, together with institutional issues, means that the High Representative is being undermined from within. Furthermore, the resistance in enhancing the budget of the European External Action Service, which, in terms of staff and resources, is the size of the Dutch Foreign Office, was viewed as difficult when at the same time high expectations, as to what should be delivered, prevail. However, the participants agreed that no matter what level of resources is spent they have to be justified. More importantly, the participants agreed that without political will and leadership positive outcome is difficult even when the right instruments and resources are at hand.

Although there was agreement that the EEAS is not to add services that member states don't deliver but that it is there to deliver collective actions, diverging opinions on the new instrument, its capacity and strategic challenge were present throughout the discussion. The chair of the session thus concluded that ‘if there is consensus there is no need for the High Representative but if you don't have consensus then you do’.

The Arab Spring had left Europe in the dark. Almost no think tank had predicted what would happen there. It thus pointed towards a need of developing methods that can detect developments in the region. The lessons learned from a highly diverse region was that monarchies seem to be quite stable compared to other regimes in for instance Syria and Egypt. It was suggested that Europe should play an active role in the region as the countries involved are dependent on cooperation with Europe. It was further suggested that the EU experience with transition, rule of law and democratisation should be utilised by helping institutions to build democracies and open societies in the region. At the same time Europe should get the order right: The first step towards democracy lies in the priority of ensuring rule of law ‘you can have rule of law without democracy’ one participant claimed, ‘but you cannot have democracy without the rule of law.’

Emphasis was made on the implementation of the European Neighbourhood Policy in the Arab and North-African region, which already is at hand. The argument was that the more the neighbourhood becomes like Europe the better it is for Europe. However, it was underlined; things have evolved in spite of the policy rather than because of it and caution should be called, in order not to come across as patronising. These countries, it was emphasised, remain authoritarian and this should be remembered whenever action is taken.

A recommendation for Europe was to kick-start the economies of the region and to link the countries to each other. Suggestion was made for Europe to be a broker in the region, that the ENP could work and that implementation of it is due. Another suggestion was to get the private sector involved and to look into combining the ENP with policies of the economic area. What Europe could offer would be economic collaboration and a trading relationship – similar to the European Economic Area. This would offer an alternative trade opportunity to the BRIC countries whose involvement in the region should not be under estimated.

The French-British defence agreement was a trigger for other member states to think that others will be left behind with limited impact and less relevant deployment capabilities if action is not taken. When regarding the possibility of and condition for closer European defence cooperation, one participant said, smart defence is unthinkable without France and UK. Other member states thus had to be convinced that they are in as well. In Germany the cut of military placements around 10 % and the budget constraints underline the necessity for closer defence cooperation (although the problems however starts when this goes into action as federal states are reluctant to enter such military cooperation). The current discussion on smart defence therefore is at the forefront of the defence agenda. Smart defence looks at opportunities for pooling and sharing. The Chicago summit in April and ministers meeting at the end of November address exactly that.

One participant mentioned that sufficient ambition is needed when it comes to pooling and sharing. More initiative is needed in order to fill the shortcomings in capabilities. For this, top-down coordination is necessary. The Franco-British agreement was mentioned as a source of inspiration; David Cameron and Nicholas Sarkozy made the agreement in spite of having been advised against it, and were successful. It was suggested to engage in a comprehensive and systematic dialogue based on trust, focus on the defence effort and to identify opportunities and redundancies. These priorities would thus, it was concluded, build the base for the debate, also needed when discussing pooling and sharing. Prioritisation and specialisation were added as a condition to generate the quantum leap sought when enhancing the European defence cooperation.

The European Roundtable, as organised by the Konrad-Adenauer-Stiftung since the 1980s, is an integrated platform of exchange, discussion and coordination of initiatives between experts and politicians of the EU Member States. This year thus again brought together high-level representatives who were enabled to engage in profound discussions and exchange, point out differences and similarities and also illuminate discrepancies and clarify misunderstandings. The roundtable, headed under the subject "Europe after the Lisbon Treaty", will be continued in 2012. 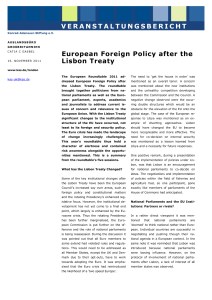