Libya and its implications for the UN, NATO and the EU - Foundation Office United Kingdom and Ireland

Libya and its implications for the UN, NATO and the EU

by Claudia Crawford, Catja C. Gaebel, Dr. Aylin Matlé
In the light of the current allied intervention in Libya the Konrad Adenauer foundation hold a workshop on ‘Libya and its implications for the UN, NATO and the EU’ through panel discussions on 21 June 2011 in London.
July 4, 2011 Ordering Information

In early June, NATO extended its operation in Libya until September after the mission was launched in late March. Unless there will be another extension, the operation will thus end in about two months. What ever the result of the operation “Unified protector” will look like in the end, it is certain that the mission will have a major impact on the future of NATO, but it will equally affect the UN and the EU.

The intervention is the first time the international community called upon the “Responsibility to Protect” (R2P) - established by the UN General Assembly in 2005 - to justify the Libya campaign. This will almost certainly have consequences for International Law and the sovereignty of nation states far beyond the current intervention in Libya, since the R2P could conceivably become a new precedent and thus trigger further humanitarian interventions.

As for the EU the Libya campaign and the Arab Spring raises questions about the strategic objectives and priorities of the EU diplomacy and priorities. It questions its abilities as crisis manager and the capability of the European External Action Service as a foreign and security instrument of the Lisbon Treaty. European allies still struggle to overcome internal divisions. Strong austerity measures will lead to even smaller defence budgets, further reducing force projection capabilities of European NATO states. In what way will these constraints hamper the future development of a coordinated and coherent Common European Defence and Security Policy? Since the EU has failed to formulate an efficient approach towards its neighbours in the South, along which lines will the Union now change its neighbourhood policy to help consolidate the gains made in the uprisings in North Africa and the Middle East? The same holds true for NATO Partnerships with Northern African and Middle Eastern countries. Although some cooperation’s have successfully been established in the past, the Alliance needs to rethink these relationships to sustain and accelerate democratic gains in this volatile region.

The seminar approached this broad range of topics in three sessions with a respective panel discussion concerning ‘International Law between State Sovereignty and Humanitarian Intervention’, ‘The Future Role of NATO: How to Formulate a Credible Level of Ambition?’ and ‘Expectations for the EU Foreign and Neighbourhood Policy and NATO Partnerships’.

In the course of the panel discussions, a catalogue of criteria for when to refer to the R2P, which the international community can be guided by were brought to the fore and intensively discussed. Attention was also paid to the allies’ strategic interests in Libya and whether the goal and format of the operation in Libya can be regarded as indicative for future missions of the alliance. Beyond, the participants of the workshop focused on the commitment and capabilities of European NATO states within the Alliance and the prevailing importance of U.S. support in international interventions. Consequently, they voiced concern over the continuing European dependence on American military assets and hence the indispensable nature of US support. Furthermore, panellists as well as other participants considered possible strategies the EU and NATO could embark upon stabilizing Europe’s Mediterranean periphery in the future.

Due to the intensity and variation of the discussions at the workshop, the participants arrived at a number of different conclusions and questions that still need to be answered by the UN, EU and NATO in the future and some tangible recommendations. Those findings will be published in the form of a policy paper soon. 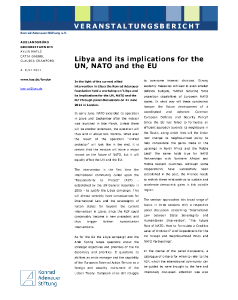 Libya and its implications for the UN, NATO and the EU (Pdf) v_2
Download

“Libya and its Implications for the UN, NATO and the EU”