Understanding and Dealing with the Spread of Populist Extremism in Europe

"Populism is in itself, an imprecise, nebulous, chameleon-like concept, although all of us – layman and expert alike – somehow believe we know what it means.“ So Florian Hartleb in this commentary to a series of events that has made the discussion about the reason for the rise and spread of populist and extremist parties in Europe subject to investigation.
October 13, 2010 Ordering Information

New parties whose success hits the headlines in Europe – some of them even in government – are labelled “populist”. Since the early 1980s, par-ties of a new type – more often than not right-wing populists with an anti-establishment ethos, a protest agenda and a charismatic leader – have re-peatedly performed well in national elections, as they have in France, Aus-tria, Italy, the Netherlands, Belgium, Switzerland and Scandinavia. Only countries like Britain and Germany have proven largely immune, although (or perhaps because) they have ex-treme right-wing parties in the classi-cal mould. Since the political transfor-mation, populism has also been making an impact in Eastern Europe.

Throughout Western Europe, these right-wing populist challengers are currently play-ing blatant islamophobia as their trump card. The outstanding example is the char-ismatic Dutchman and Muslim-hater Geert Wilders, who even manages now to dangle the minority government on a string. In Austria, too, Haider’s successor Heinz-Christian Strache dominated the Viennese election campaign with his anti-Islamic ti-rades. The slogan is crude: “Daham statt Islam” (“Our home not Islam”). In Switzer-land, the Volkspartei played a key role, via the referendum in November 2009, in hav-ing the construction of minarets (by all ac-counts fairly modest in number) banned un-der the Swiss constitution. Even in Ger-many, a zone declared free of right-wing populism, provocative comments on the politics of integration seem to fan flames, as witnessed by the amazing success of Thilo Sarrazin’s book and the broad debate that accompanied it. It did look briefly as though the right-wing populists would be unable to come up with any ideas for the future of Eu-rope. The taboo-breaking anti-establishment warriors are not a force in Brussels or in the fairly insignificant Euro-pean Parliament, especially as they often cannot agree among themselves and do not shore up any cross-border formations. Now, however, anti-Islamic mobilisation is appar-ently bearing fruit. A new idea for a Euro-pean fortress seems to be taking shape.

Opportunity structures for new political con-tenders are similar in some respects. By the recent decade, the long-standing party sys-tems in Western Europe were tottering. There was talk of the social democratic par-ties heading for their demise, and yet their traditional adversaries, the Christian De-mocrats, have been lamenting a similar plight. Across the countries of Western Eu-rope, we have variously witnessed the in-stability of social insurance systems, dis-comfort with the European Union and its enlargement, and the – perceived or real – neglect of national interests. The reasons for the rapid rise of quite different parties are complex in character: anti-modernism, a diffuse sense of anxiety about the future, fear of losing material and social founda-tions, a romantic yearning for a society which people feel they understand and con-trol, a profound loss of trust in politicians, reinforced by the emergence of technocratic elites holding positions in parties and the public realm, a latent fear of “the other”, a lack of debate about values, a failure to ad-dress the big questions of the future, the taboo status of serious problems – all these factors have created fertile soil for the new populist groups.

Populism and extremism may be linked, but they are not necessarily. Populism does not of itself occupy a grey zone be-tween democracy and extremism. Anyone using populism and extremism as synonyms is making a mistake, wittingly or not. Popu-lism does not have to display anti-democratic or unconstitutional tendencies. Its hallmark is actually pragmatism. This can lead on occasion to combinations of contradictory messages. By defending lib-eral achievements, Geert Wilders was able to set his particular brand of national popu-lism apart from the plain xenophobia and chips on the shoulder associated in the Netherlands with right-wing extremism. His orientation towards the United States and Israel made Wilders a maverick among the family of national populists, not exactly known for their pro-American or pro-Israeli sentiment.

Right-wing populists clearly exert a thematic influence in the cultural sphe-re, especially on the politics of immigration. The fiction cultivated by right-wing populist movements is that they champion the in-digenous population against immigrants. They inflate cultural questions with value conflicts. This also gives them the chance to build their political visibility in a way that economic and social issues no longer offer. Fundamental social issues around abortion and equal status for same-sex partnerships also seem to have been resolved, at least in Western Europe. In the light of tough eco-nomic conditions, populist arguments against immigration fall on willing ears all over Europe, interpreting the fundamental problems of excessive welfarism as simplis-tic equations related to immigration. Europe is seen as a kind of “island of the blessed”, which can only be preserved by protecting its people against immigrants from “alien cultures”. Right-wing populist parties are not fascists of a new type intent per se on eroding democracy. The danger is subtler than that, and lies in the crisis of the estab-lished parties. It would be all too easy for them to denounce their populist challengers as extremists who threaten the constitution.

The most common demand in this context is that the Christian and Social Democratic parties should hone their own programmatic profiles. However, in the light of processes of modernisation and differentiation in soci-ety, this begs the question of whether it is actually possible, given the variety of politi-cal views among the population, to present attractive and yet distinctive content to the-se broad electoral target groups. This basic dilemma could mean that right-wing popu-lism is in for the long haul in European poli-tics. 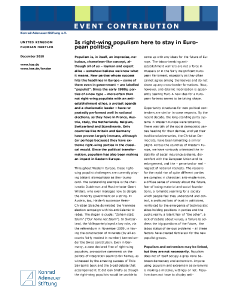 Understanding and Dealing with the Spread of Populist Extremism in Europe