by Claudia Crawford
On 24 March 2011 Chatham House and the Konrad Adenauer Foundation held the second of three workshops on the European External Action Service. The second meeting was held under the title: ‘The EAS: Partnerships and Priorities for a new European Diplomacy’.
March 24, 2011 Ordering Information

One of the main accomplishments of the EU’s Lisbon Treaty was the decision to create a European External Action Service (EEAS). The EEAS was conceived in order to assist the EU to deliver a more comprehen-sive set of external policies that would draw upon the EU’s multilayered areas of competence and capability, to include development assistance, trade policy, and foreign and security policy. The Lisbon Treaty brings these competences together into one EU civil service under the leadership of Catherine Ashton, formerly the EU’s Trade Commissioner.

The past year since the ratification of the Lisbon Treaty has been spent trying to develop the legal basis, working practises and staff structure for the EEAS.

This is the background upon which the sec-ond workshop on the future of the European External Action Service and EU Foreign and Security Policy took place. The four sessions ‘The State of Play: The Emerging Shape on the EAS’, ‘The EAS and the EU’s Strategic Partnerships’, ‘The EAS and the Changing European Neighbourhood’ and ‘Diplomatic Innovation in the EAS’ framed the analysis and discussions on a number of key con-cerns. Amongst those were the competing competences of the EU institutions, the im-pact of strategic relationships and partner-ships on the EU’s neighbouring states, the challenging diplomatic environment in which EEAS operates, as well as Middle Eastern perceptions of EU foreign policy in the wake of the recent events in the Middle East and Northern Africa.

The meeting addressed central opportuni-ties and concerns of the European External Action Service and the EU’s Common For-eign and Security Policy. Contradictions of EEAS and the Foreign and Security Policy were discussed, and ideas of how to over-come some of the contradictions were rai-sed. While the post of High Representative for Foreign Affairs and Security Policy, sup-ported by the structure of the EEAS, will help strengthen and unify the Union’s ex-ternal action, other provisions, such as the composition and status of the External Ac-tion Service, are still discussed.

On 3-4 May 2011, a third meeting on the future of the European External Action Ser-vice and EU Foreign and Security Policy will be held in Brussels and will conclude the workshop series. A joint paper displaying a summary of the meetings and concrete rec-ommendations will be published in June 2011. 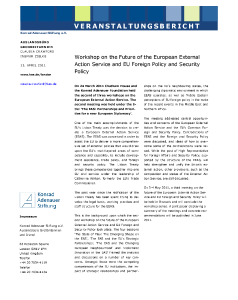 The European External Action Service: Partnerships and Priorities for a New European Diplomacy