Following his successful re-election in the spring of 2019, Joko Widodo, known as Jokowi, was officially inducted as President of the Republic of Indonesia on the 20th of October 2019 in Jakarta. Three days later, he introduced his new cabinet, whose personnel composition provided some surprises.
November 11, 2019 Ordering Information

On the 17th April 2019, presidential and parliamentary elections took place in Indonesia for the first time simultaneously.  Two candidates applied for the head of state:  Incumbent Joko Widodo and his longtime rival, former General Prabowo Subianto. The six-month election campaign was conducted very exaggerated, but it was largely conflict-free and went smoothly. However, the evening after the announcement of the official election results on 21st May 2019, massive protest demonstrations took place in Jakarta, which led to violent clashes between supporters of the defeated Prabowo and the security forces and ended with several deaths and hundreds injured.

Prabowo - who had already competed unsuccessfully against Jokowi in 2014 - initially refused to recognize the election results and raised the charge of manipulation. However, the electoral commission rejected this.

The election victory of Jokowi - who went with the Islamic scholar Ma'ruf Amin as candidate for the vice-president in the race - turned out clearly with 55.5% of the vote  (Prabowo: 44.5%). However, demonstrations and outbreaks of violence after the election showed that Indonesian society is divided and that there is serious potential for tensions and conflicts. After a lawsuit by Prabowo at the constitutional court for alleged election fraud was dismissed as groundless, for the opposition camp was clear that it can no longer come to a change of power by legal means.

It began the phase of political negotiations. Jokowi was interested in obtaining a strong political mandate for his second term with the support of a broad spectrum of political parties. In the election campaign, the president was supported by nine parties; his opponent had five parties behind him.

Talks on forming a government

In the course of the talks on forming a government, there were surprising developments. First, there was a public rapprochement between Jokowi and Prabowo, as both met demonstratively in the newly opened fast train MRT in Jakarta for a reconciliation conversation. Afterward, four of the five opposition parties - especially Prabowo's Gerindra Party - agreed to support the government and to participate in the new government. This, of course, aroused discomfort among the parties of the Jokowi camp because then the number of available government posts would have to be divided among more interested parties.

The strongest force in parliament with 128 of a total of 575 seats is PDIP-P (Partai Demokrasi Indonesia Perjuangan). The Chairman of the party that Jokowi belongs to is the influential politician Megawati Sukarnoputri and knows Prabowo well from earlier times, when she ran (and lost) with him as a vice in the 2009 presidential election. Prabowo was also allegedly the one who recommended Megawati in 2012 to set up the then relatively unknown Jokowi as a candidate of the PDI-P for the governorship election of Jakarta. When Jokowi then compete against his former mentor Prabowo in the 2014 presidential election, it came between the two politicians to a discord. Jokowi won slightly ahead and was elected as President in 2014. The election in 2019 was then a new edition of the duel of both parties.

The reconciliation between Jokowi and Prabowo had the result that the ex-general agreed to join the new cabinet of the President and to support the government with his party Gerindra (third strongest fraction with 78 seats). In the course of the talks on government formation, Jokowi was facing strong pressure from the political parties, each claiming as many government positions as possible. Since the head of state wanted in his team also impartial experts, the placement of each position became a complicated puzzle game. The result is a compromise. The composition of the new government reflects the aspirations of the President, to get as strong and broad support for his second term as possible and thus reduce the potential for tension and conflict in the society. However, the grand coalition of now six parties (PDI-P, Golkar, Gerindra, PKB, NasDem, and PPP), which controls 75% of seats in parliament, has the disadvantage that there is almost no relevant opposition.

The new government consists of 38 ministers and 12 deputy ministers. 22 ministers have no political party affiliation so that the number of professional experts has increased in the new cabinet. Only five ministerial posts were held by women, compared to eight ministers previously.

There are some notable new appointments in the government team.

Especially the nomination of Prabowo Subianto as Minister of Defense has caused surprise. That the ex-rival and challenger of Jokowi will subordinate himself as a cabinet member was hardly imaginable until recently. However, the ex-general gets with the strategically important and politically influential post also a not insignificant political power instrument in the hand. Jokowi wants to be prepared for the global and regional security challenges, especially the growing influence of China in Southeast Asia, with Prabowo as minister. The most important task of Prabowo will be the modernization and reform of the Indonesian armed forces.

With former constitutional judge Muhammad Mahfud as Coordinating Minister of Political, Legal and Security Affairs, this key position will be for the first time occupied by a non-military.

The new Interior Minister will be the former police chief General (Ret.) Muhammad Tito Karnavian. General Tito has spent many years fighting terrorism and made a name for himself as a member of the Densus 88 in arresting the perpetrators of the 2002 terrorist attacks in Bali. His successor as police chief also comes from this unit, which makes it clear that the fight against terrorism and radicalism will be a priority of the new government.

Foreign Minister Retno LP Marsudi also remains in office. She is a career diplomat and had successfully contributed in her first term for the appointment of Indonesia  as a non-permanent member of the UN Security Council for 2019-2020 and member of the UN Human Rights Council from 2020 onwards.

The nomination of Nadiem Makarim as Minister of Education and Culture is also a surprise. Nadiem is the founder of the successful start-up company Gojek (a digital multiservice platform). And with his 35 years the youngest minister in an Indonesian government.

The appointment of Fachrul Razi as Minister for Religion met with mixed reactions. Especially the big Islamic organizations Nahdlatul Ulama and Muhammadiyah sharply criticized the occupation of the religious ministry with an ex-military. It seems that at the appointment of this personality the aspect of combating radicalism and extremism also played a role.

Challenges for the future

The new cabinet has to ensure stability and security in President Jokowi's second (and final) term of office. Whether the broad political coalition will last for the next five years will be seen. The political, geopolitical and economic challenges are enormous.

At the end of September, massive street demonstrations took place in Jakarta and other cities. This time, especially young people from the student milieu protested against the new anti-corruption law passed by parliament which limits the competencies of the previously independent anti-corruption agency KPK. The KPK is highly appreciated by society as the highest authority in the fight against the spreading corruption in the country. The adoption of another controversial law on the reform of criminal law has been postponed at the request of the President.

There have also been riots in the provinces of Papua and West Papua. In August and September, people went to the streets in protest against racism and discrimination, but also separatist demands have been raised.

As his most important future project, the President announced the relocation of the government seat from Jakarta to East Kalimantan on the island of Borneo. There, a new modern capital is to be built. By the end of 2024, the first government offices are to move. The costs are estimated at least 30 billion euros, it would be the largest logistical and developmental achievement in the history of the country. 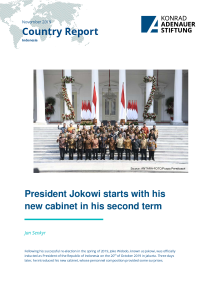