At the beginning of this week, The Tokyo Foundation and the Japan office of Konrad-Adenauer-Stiftung (KAS) organized another high-ranking non-public expert’s meeting about international challenges in the field of maritime security. The day-long roundtable discussion with representatives from Japan, NATO and Germany was opened by Masahiro Akiyama, President of The Tokyo Foundation. H.E. Cyryl Kozaczewski, Ambassador of the Republic of Poland, attended the event among representatives of other European Diplomatic Missions to Japan. 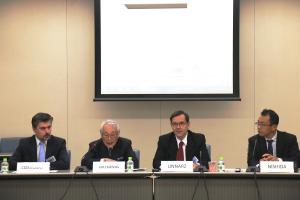