THE FIRST ROUND OF THE PARLIAMENTARY ELECTIONS IN LITHUANIA WAS HELD ON OCTOBER 9TH, 2016.

It took more than 24 hours for the Central Electoral Commission to count the votes and declare the winner. Right before midnight on October 10th it became ultimately clear that the Homeland Union – Lithuanian Christian Democrats (HU-LCD) received 1441 votes more than the Peasant and Greens Union and won the first round of the parliamentary elections of 2016. HU-LCD has already won 21 parliamentary seats after the first round, two seats more than the Peasants and Greens Union.
October 20, 2016 Ordering Information

By voting for HU-LCD and Peasant and Greens Union Lithuanians showed their dissatisfaction with the current ruling coalition (Social Democratic Party, Order and Justice Party as well as Labour Party) and anticipate having a new government for the next four years.

The Lithuanian Social Democratic Party, which had been the strongest parliamentary group in the Seimas following the 2012 elections, only came in third whereas the Order and Justice Party hardly passed the 5% election threshold. The Labour Party that was founded in 2003 was left without any mandates this time. The Liberal Movement performed far better than most recent opinion polls had predicted and is preparing itself for coalition negotiations. By now 73 out of 141 parliamentary seats have already been allocated with the rest waiting to be occupied after the second round on October 23rd.

The preliminary results show that people clearly voted for change in the government: 275.365 voters (21.66%) expressed their support for the HU-LCD, a similar number of 273.924 (21.55%) Lithuanians voted for the Peasant and Greens Union (Table 1). The current ruling Social Democratic Party was left in third place with 183 479 (14.43%) of the votes (Table 1). The Labour Party which currently is part of the governing coalition is the main loser of the election. The Labour Party gained only 4.69% of the votes and will probably not be represented in the parliament (Seimas) during the next four years.

70 parliamentary seats were allocated among six out of 14 political parties (coalitions) that participated in the 2016 parliamentary elections. In 3 out of 71 single-member constituencies one of the candidates already got more than 50% of the votes in the first round and will not have to compete in the second. Among these three winners is Ingrida Šimonytė, former Minister of Finance (2008–2012) and a member of the Homeland Union-LCD. The other two highest-rated candidates are members of the Electoral Action of Poles in Lithuania – Christian Families Alliance. After the first round it was clear that 54 MPs have not been re-elected.

The defeat in the election resulted in strong reactions just one day after. The leaders of the Labour Party (Valentinas Mazuronis) and the Order and Justice Party (Rolandas Paksas) stepped down. Both of them are members of the European Parliament and will remain in their position in Brussels.

The current Speaker of the Parliament, Loreta Graužinienė from the Labour Party, announced on Monday that she will leave not only the parliament but also the Labour Party.

Barely half of the eligible voters casted their ballot on Sunday. The electoral turnout on 9th October, 2016 reached 50.56% which is around 2% lower than in 2012. Only 8% of the votes were cast by Lithuanians up to the age of 24 years (Table 2). The elderly were much more active – 14% of all Lithuanians who voted in the parliamentary elections on Sunday are older than 74 years.

On 23rd October the second ballot of the 2016 parliamentary elections will take place in 68 single-member constituencies. The two highest-rated candidates of the first round will compete for the place in the parliament. Amongst them there will be 42 conservatives (HU-LCD), 40 candidates of the Peasant and Greens Union, 21 social democrats (Social Democratic Party), 12 liberals (Liberal Movement), five members of the Labour Party, four candidates of the Order and Justice Party and several individual candidates, representing parties, which did not pass the threshold. There are 22 conservatives (HU-LCD) and 21 Peasant and Greens Union candidates who were the leaders of the first round in the single-member constituencies.

What will be the next ruling coalition?

Already before the election day, it was predicted that three parties – HU-LCD, Peasant and Greens Union and the Liberal Movement – could form a governing coalition for the next parliamentary term of 2016 till 2020. After the first round it seems that this prediction may become reality. Politicians and political analysts name several possible scenarios, which may occur after the second round on October 23rd. Having in mind the results of the first round, it is highly possible that the new ruling coalition will consist of the three above mentioned parties. The Peasant and Greens Union said that they will not participate in any coalition negotiations until the end of the second round. Afterwards, they claim to be prepared to negotiate coalition building possibilities with Homeland Union-LCD as well as with the Social Democratic Party. However, they said that they are not ready to form a coalition with the Party Order and Justice which could be a natural partner for the center-left coalition. Furthermore, it is highly unlikely that the Homeland Union-Lithuanian Christian Democrats could join forces with the Social Democratic Party. What is more likely and worth mentioning is that for the first time in Lithuanian history there might be a possibility for only two parties (HU-LCD and Peasant and Greens Union) to have a majority in the parliament and to form the governing coalition. Although the first scenario seems to be the most realistic, it will be decided in the second round of the parliamentary election who will be the actual winner in 2016 and what kind of government Lithuania will have for the next four years. 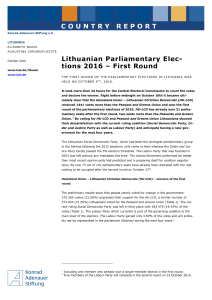