Bridging the cultural gaps in journalism training and education in Asia

by Eric Loo
Governments in parts of Asia and media scholars have alluded to a form of journalism that should reflect ‘Asian cultural values’ rather than defer to media practices and cultures of the West. These are commonly attributed to a cultural preference for consensus rather than confrontation, order and stability versus chaos and conflict, community good rather than individual rights, deference to authority, and respect for elders.
July 24, 2013 Ordering Information

This book premises that journalism is a product as well as a producer of the environment where it operates. Bridging the perceived journalistic cultural gap between Asia and the West, relies less on asserting one form of journalism is better than the other, but more on how journalism as understood, conceptualized, taught and practised in Asia and the West can be richer through a blending of the essence that makes each form peculiar to its environment. Theoretical explications are complemented by reflective commentaries from Asian journalists and interviews with media trainers. This book aims to show how the values and views of journalists in Asia reflect their counterparts in the West, although the notion of reporting ‘without fear or favour’ needs to be contextualised to the political realities in Asia.

Dr Eric Loo has worked as a financial journalist, features editor, production editor, and media educator in Malaysia and Australia. He currently lectures in journalism at the University of Wollongong in New South Wales, Australia, and writes a column for an online news portal, Malaysiakini, and a financial weekly, The Edge Malaysia. He has conducted journalism training workshops in Australia, Malaysia, Indonesia, Hong Kong, Papua New Guinea, India and Laos. Eric’s research interests are in development journalism, best practices of journalism in Asia and reporting about race and religion. He is founding editor of the refereed journal Asia Pacific Media Educator, and has authored and co-edited books in international journalism and cross-cultural communication. 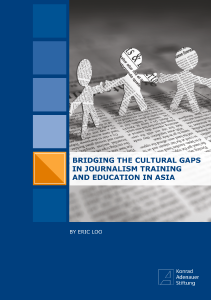