Political Public Relations in the ASEAN-context

For this event KAS invited important personalities and experts both from Cambodia and various member countries of the ASEAN to share their experiences and deliver insight into the world of Political Communication and political Public Relations.
April 04 - 07, 2012

Political developments require active participation from all groups of society. Active participation requires informed citizens who are able to make up their minds. The media have to provide the necessary information in a professional and responsible manner. They have to analyse, to put relevant issues into context, to explain and to comment. In order to do so, the journalists are the first who need to know about the chances and challenges of political developments, about new ideas, opinions and important decisions on government level as well as among the members of the senates, parliaments and the other political entities of their countries.

Fast, accurate, relevant and sufficient information counts, all the more when it comes to complex and important international issues. In a globalised world with more and more political, environmental, economic and social developments no longer restricted by country boarders, mutual understanding between nations and their population is a prerequisite for peace, prosperity and development.

However, for politicians it is not always easy to draw people’s attention to important issues and to find support and understanding for difficult political decisions. On the other side, media and journalists sometimes suffer from not getting enough information in order to report and explain what is going on in government, senate and parliament.

This is where the spokespersons come into place. They work for the political entities and institutions but they are no politicians. They stay in close contact to the media but they are no journalists. Unlike them, the spokespersons are not independent but have to get political messages and information across to the media. They have to explain these messages, to defend them and to find support for it. However, they are also the ones who learn first about possible resentments among the journalists, about what questions they have and what TV, radio and newspapers like to report about. In this respect and on behalf of their superiors from the political spectrum, the spokespersons are also "brokers" of public opinion, the necessary link between politics and media.

This event tries to put politics, media and Political Communication into con-text. Participants will learn about the fundamentals, the tools and organisational aspects of modern political "PR", about crisis communication and about how media receive and process political messages according to their workflows and audiences. 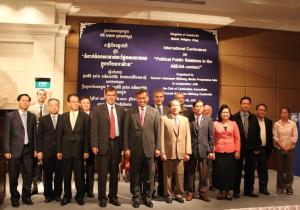