Sweden took over the OSCE Chairpersonship in January 2021 as the largest regional security organization with 57 participating States representing more than one billion people from North America, through Europe to Central Asia.
April 6, 2021 Ordering Information

The first 100 days of the Swedish Chairpersonship have passed, which offers a good opportunity to look at the challenges in guiding the OSCE; what has been achieved so far; and to discuss how to approach the next couple of months.

The OSCE stands for Comprehensive Security

The OSCE is an inclusive forum for dialogue on security issues and uses a comprehensive approach towards security, covering politico-military, economic and environmental as well as human aspects. Activities range from confidence-building measures, conflict prevention, arms control, the fight against human trafficking, fostering energy security, combating corruption and promoting women economic empowerment, connectivity and human rights, as well as election observation. The origin of the OSCE goes back to the Conference on Security and Co-operation in Europe during the times of the Cold War, which led to the signing of the Helsinki Final Act in 1975, in which the signing countries agree to refrain from the threat or use of force.

The Secretariat is based in Vienna with a network of field operations between South-Eastern and Eastern Europe and Central Asia. The field missions are established upon agreement by the host country. The OSCE’s ‘mandate’ is based upon commitments, including the Helsinki Final Act with the 10 principles (Decalogue), to the Paris Charter of 1990 and the Vienna Document, to Ministerial Council Decisions.

Difficult waters for the OSCE

The organization went through some heavy waters in the recent past; frozen conflicts became violent such as in Nagorno-Karabakh, other conflicts continue despite all efforts. The 57 could not agree on extending the four vacant top jobs of the Secretary General and the three Heads of Institutions in the summer of 2020, which was settled almost last-minute during the virtual Ministerial Council Meeting in December 2020 under the Albanian Chair, where Mrs. Helga Maria Schmid was appointed as Secretary General heading the Secretariat.

Sweden, being represented by Mrs. Ann Linde, Minister for Foreign Affairs as Chairperson-in-Office (CiO) this year, has taken up the Chairpersonship during a crucial period of time. Challenges have become more complex, even without considering the Covid-pandemic. The previous Swedish Chairpersonship, which dates back to 1993, was confronted with the consequences of the implosion of the Soviet Union and the Balkan War. But it was in a time that was still marked by the euphoria about overcoming the Iron Curtain in Europe. In contrast, current security threats from ongoing conflicts, organized crime, terrorism, cyber threats and environmental destruction take place in an atmosphere of increasing confrontation among the OSCE participating States.

Sweden is focusing its programme on 'back to basics'. Sweden is prioritizing on common values of diplomatic dialogue, co-operation and shared commitments, aiming at defending the European security order. Work on conflict resolution in Ukraine has a high priority. Minister Linde has already visited the region. The Swedish Presidency has recently achieved an initial success and has cleared the blockades for the extension of the mandate of the Special Monitoring Mission (SMM) in eastern Ukraine. Another focus is set on the conflict in Nagorno-Karabakh, which needs a sustainable political solution. In the course of the summer, the Swedish Chairpersonship will focus on the negotiations to prepare the upcoming Ministerial Council meeting in Stockholm on 2 and 3 December 2021.

In its agenda, Sweden is also addressing the implementation of the UN Security Council Resolution 1325 on Women, Peace and Security. Women are still underrepresented in the area of conflict resolution. Besides, Sweden is concentrating on gender equal societies, which have better prospects for resilient and sustainable development. Women are exposed to economic vulnerabilities. In the OSCE economic dimension, Sweden will focus on women’s economic empowerment to enable political participation by women in conflict prevention.

The Chairpersonship is, in addition, assisted by Special Representatives to ensure better co-ordination of participating States’ efforts in specific areas, e.g. Youth and Security, Gender, Anti-Corruption, and South Caucasus. The involvement of civil society and addressing women in peacebuilding is being underlined by Sweden.

Germany as a strong supporter

Germany is supporting Sweden in the important endeavours ahead. The current pandemic puts an obstacle into sustainable diplomatic trust-building, where regular personal contacts are key and cannot be fully replaced by virtual meetings. Germany welcomes the OSCE election observation missions as a visible added value towards democracy. It should be recommended to include the potential influence of modern campaigning or the use of new technologies into the election observation methodology by ODIHR, the Office for Democratic Institutions and Human Rights.

The OSCE’s toolbox on conflict resolution, aiming at facilitating dialogue among conflicting parties, can only be meaningful with adequate political will by all the stakeholders. The OSCE has the unique approach of consensus-based decisions. Unnecessary pressure that misuses this principle is jeopardizing the functioning of the Organization. It is to be hoped that the Swedish Chairpersonship will be able to prevent such attempts. 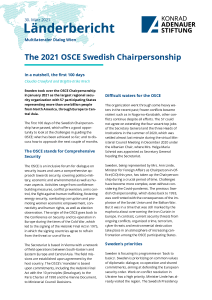