Panorama-Insights into Asian and European Affairs

This issue of “Panorama – Insights into Asian and European Affairs” analyses the focal areas of Myanmar's political transition - institution-building, principal actors and long-term processes that will hopefully lead toward a democratic, federal state
December 13, 2013 Ordering Information

Myanmar’s political transition from military authoritarianism to an evolving parliamentary system has gained worldwide attention and praise. Local and international scepticism regarding the flawed national elections of November 2010 gave way to outright optimism once the by-elections of April 2012 brought representatives from the opposition party National League for Democracy into the bi-cameral national as well as two federal parliaments. Namely, Nobel laureate Daw Aung San Suu Kyi’s metamorphose from long-term political prisoner into national parliamentarian was seen as key evidence of the government’s sincerity in its reform agenda. Since then, the country has embarked on its journey to fundamental change, encountering severe challenges, setbacks, renewed criticism but also encouraging developments.

‘Myanmar in Transition: ‘Polity, People and Processes’ shows in the first part the progress being made in re-designing the polity while also identifying key obstacles to creating a balance of power and new state institutions other than the military.

The second part portrays some of the principal non-state actors who now come increasingly to the fore: (1) Ethnic minority leaders including from political parties not only the armed groups, (2) a determined if weakened civil society that re-emerged from the more underground networks of the past, (3) the Burmese diaspora that returns to contribute to the transition in various capacities and not last (4) the grassroots populations where ethno-religious animosity between Buddhists and Muslims has burst into open violence and scorched earth. What are the roles, motives and dynamics of these diverse non-state and least controllable actors in Myanmar’s future?

The final part of this edition examines the long-term processes that will determine the success of Myanmar’s political transition toward democracy and federalism. 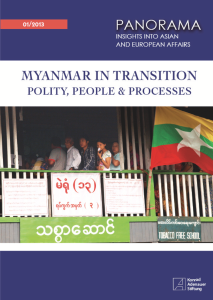 „Leave NO ONE behind“ – der Welternährungstag 2022