Nigeria in the dilemma of climate change

by Klaus Paehler
“Climate change in Nigeria is a ticking time bomb and it exists little or even nothing to mitigate its effects.” Nnimmo Bassey, Nigeria.
July 19, 2007 Ordering Information

Often it is argued that Africa need not care about climate change because in global dimensions Africa itself produces negligible greenhouse gases. Climate change is primarily caused by the developed countries, so they should be the ones dealing with it. However, it is the bitter irony of destiny that Africa contributes least of all the continents to the climate change, but will probably suffer most from its consequences. According to economists it is a typical case of negative external effects, an externalisation of costs: A noninvolved party bears the costs of a third party’s actions.

Africa produces one ton of CO2 per person per year according to American statistics. South Africa, the most industrialised country of the continent, generates 8,44t, meanwhile Mali which is at the lowest level of industrialisation, produces less than one-tenth of a ton per person per year. The whole of Africa produces about 920,000t each year, less than 4% of the global production.

By comparison, the United States of America generate about 16t per person per year, altogether about 5.7 billion tons and 23% of the global production. Therewith they are the biggest producer. China, the new star in the CO2-sky, is going to surpass the USA soon. Although these information date from 2002, proportions probably haven’t changed considerably and can serve to roughly estimate the role that Africa plays in this context of climate change.

As Africa is exposed to a number of resource-consuming stressors (ranging from HIV to corruption to permanent crises and conflicts), comparatively few resources remain to react proactively on the climate change. Seeing the climate change as an external shock to the continent caused by the externalisation of costs of a third party, payments and assistance can be considered to be a reasonable way to compensate Africa for the negative climate effects. In January 2007 at the German – African Summit in Accra, initiated by the Federal President of Germany, the former Nigerian President, Olusegun Obasanjo, appealed to international assistance in order to cope with the consequences of the climate change. He claimed that all countries should adhere to the respective international agreements.

40% of the African Gross National Product is obtained in agriculture and 70% of all African labour is employed in this sector. The dominant role of agriculture makes it obvious that even minor climate deteriorations can cause devastating socioeconomic consequences.

The fish stock at the coast and in gradually drying up lakes diminishes. Ghana alone lost about 50% since 1970. The Chad-Lake, which is the water supplier of more than 10 million people of the riparian states, has already shrunk to one-tenth of its original size. (Nigeria is like Niger, Chad and Cameroon a member of the “Lake Chad Basin Commission”, but due to the rapid shrinking of the lake it might soon lose its status of being an abutting owner.) The diminishing of fish is one factor that causes the overgrazing of stocks of bush meat. Furthermore, switching from fish to jackals or monkeys as aliment might also lead to the contracting of diseases from animals to humans. In fact, the ecosystem whose part we are, is a highly complex system where side effects cannot always be foreseen. However, this is not the right place to discuss them further.

“The deserts grow: woe him who doth them hide!”, already Nietzsche knew.

In the last 15 years the population of Nigeria grew from 89 Mio to 140 million people. This strongly growing population in combination with the increasing desertification and sahelization threatens the feeding of the people. Natural resources decrease in the north of Nigeria, meanwhile the sea level at her tropical coast in the south is rising. In the long run this may lead to internal migration and conflicts over the shrinking resources (fertile soil, water).

Even international conflicts have to be expected, because climate refugees might not to be stopped at inner African boarders. Some sources already refer to a share of illegal immigrants in South Africa or Nigeria of about 30%. To get an impression: the rise of sea level of only 20cm, would imply a displacement of 740,000 people in Nigeria, a rise of 1m, would lead to 3.7 million and 2m to 10 million homeless people in the country. The UNCCC in Nairobi reported about the menace that one day the city of Lagos (about 7-14 Mio inhabitants) might sink completely in the sea. Against this background the efforts or rather non–efforts of Nigeria to deal with these problems have to be examined.

Kyoto and its economical impacts on Nigeria

Policies to curb the climate change by reducing the consumption of fossil fuels like oil, gas or carbon, have significant economical impacts on the producers or rather the suppliers of these fuels. Nigeria is the eighth largest oil supplier in the world. The ninth largest deposits of gas are located here. The Nigerian national economy would be massively affected by a sustainable reduction of fossil energy consumption. Nigeria is practically a monoculture: about 80% of the government income, 90-95% of the export earnings and more than 90% of the foreign exchange revenues evolve from the oil sector. In the period of 1970-1990 the oil business led to revenues of approximately US $200 billion. Another US $400 billion may have been stolen or wasted, estimated EFCC, the anti-corruption agency.

However, during the last years the government of Nigeria tried to diversify. Special attention is nowadays paid to gas which emerges in the joint-production of oil. So far the gas has mainly been flared (75%), simply due to the lack of technical facilities to make use of it.

It is often burned directly on the ground, where it emerges from the soil. The arising dioxins and other carcinogens harm the inhabitants and the environment. Nigeria is flaring more gas than any other country in the world: 2.5 million cubic feet per day. This actually corresponds to 40% of the gas which is used in whole of Africa. Because of the contained methane and CO2 Nigeria’s gas flaring contributes more to the global warming than all the other emissions of whole Sub-Saharan-Africa together. According to a new study commissioned by the World Bank in 2007 Nigeria accounts for roughly one-sixth of the world-wide gas flaring which in turn, spews some 400 million tons of carbon dioxide into the atmosphere. However, the World Bank survey has listed Nigeria and 15 other oil producers, as countries that have progressively reduced gas flaring between 1995 and 2006. Until 2008 the gas flaring in Nigeria shall be stopped fully.

Following the Kyoto-Protocol is a double-edged sword for Nigeria: The probably positive long term effects on the climate change are opposed to the negative short term effects for the economic development. Observing the Kyoto-Protocol would reduce the income of the OPEC – States, amongst them Nigeria, about 25% until 2010. This would be a catastrophe for the Nigerian development plan: Urgently needed investments in education and infrastructure could at best be done partly which would have long term negative effects on the development path of the country.

China’s policy of securing energy supply with its growing involvement in the extractive industries in Africa will also play an important role for Nigeria; by the way it’s worth mentioning that Nigeria plans to get about 4000MW out of own nuclear power stations in the nearby future. The question of reactor safety is a delicate one in a country which does not have a stable conventional power supply and whose airspace is described as unsafe by the President. The ecological scenario could change fundamentally over night.

Nigeria signed the Kyoto-Protocol (Nigeria is part of the Non-Annex I economies, so it is not committed to take measures), but according to IPPA (Institute for Public Policy Analysis), the co-founder of the “Global Coalition on Climate Change” which consists of 26 NGOs of 23 countries, Nigeria would be better off with own initiatives to handle the climate change. It is interesting that IPPA sees the climate change as an alarmism of interested parties. A lot of suggested policies would rather harm than benefit Nigeria, according to IPPA.

Instead, Nigeria should strengthen her power of adjustment, for example by building up market based structures. Thus foreign and domestic investments, trade and prosperity would be stimulated. Likewise the ability of the country to handle challenges spontaneously would be strengthened. Principally this is a good approach. But although the author sympathizes with market based structures as they connect the desiderata freedom and prosperity, he is rather sceptical regarding their implementation in Nigeria. Just like in many other developing countries these structures might lead to the combination of “capitalism for the poor” with “socialism for the rich”.

"What to do?" - Nigeria does not ask this question

Nigerian politics and public discussions are barely addressing the mentioned problems. The last two years were so much dominated by the internal questions of power that political issues as regards content or even specific problems like the climate change, would not have attracted real attention outside the circle of environment experts or NGOs. In terms of short term development policy more urgent worries exist and strategic foresight is not a fixed part of politics in the country. Furthermore, the climate change and its problems and solution strategies do not generate great publicity effects as they are too complex for rather superficial political talks.

Nigeria’s development plan does not recognize the economical threat caused by the climate change nor the menace of declining oil prices which could result from a reduced consumption of fossil fuels. Correspondingly concepts to deal with these issues have not been submitted so far. However, the responsible body, the National Planning Commission, announced to pay more attention to them in the future. In this context the newly elected president has a number of important tasks to fulfill: The diversification of the economy, the independence of fossil fuels (in this case independence of selling fuels), revitalization of the stagnant agriculture, industrialization (the share of the industrial product of the GNP has reduced about 6% in the last years) and the development of the hardly existing service sector are some keywords.

By all means, foresight is to be wished to the new President; otherwise the country risks to be speared by one of the two horns of the dilemma: climate change or declining oil–prices. 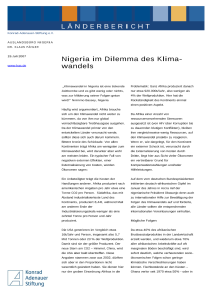 Carbon border adjustment mechanism: Tax or tariff for the climate?