How Vital is Religion in the 2019 Elections in Nigeria? - Foundation Office Nigeria

How Vital is Religion in the 2019 Elections in Nigeria?

Konrad-Adenauer-Stiftung organized a one day round table meeting on “How Vital is Religion in the 2019 Elections in Nigeria?” in Abuja on September 6th, 2018, in an effort to bring CSOs and Media to interchange on ways in which elections are being affected by religion in Nigeria.
September 17, 2018 Ordering Information

The roundtable meeting was organized in an effort to bring CSOs and Media to interchange on ways in which elections are being affected by religion and the vitality of religion to the electoral process of the country with the aim of articulating the challenges and proffering possible solutions to ease the 2019 election.

The policy dialogue series is one of many ways Konrad-Adenauer-Stiftung supports peace and stability in Nigeria, through information and experience sharing between stakeholders, CSOs and media, the dialogue created room for the participants to express their views on the subject matter. It was an open dialogue participatory session where the participants shared personal encounter on ways they have been affected by the topic.

In his welcome address, the Resident Representative of Konrad Adenauer Stiftung Dr. Vladimir Kreck stressed on the timeliness of the event to the relation between religion and politics in Nigeria with special respect to the fast approaching 2019 election. He further encouraged active participation and interaction by the participants, stating his willingness to welcome recommendations and conclusions form the participants, also hoping a lot will be learnt from the program.

The resource person Prof. Jacob Kehinde Ayantayo, professor of religious ethics, religion and society, and religious peace and conflict studies from the University of Ibadan gave a brief insight into the peculiar characteristic of politics and elections in Nigeria is the intertwining nature and relationship between religion and politics. Religion plays important roles in election of candidates at party primaries, and in the selection of running candidates from local government elections, to state elections and at presidential elections.

Furthermore, the unwritten law in Nigeria politics is if the president is a Muslim, his deputy must be a Christian or vice versa. And if a Christian president completes his 8 years in office, the next president will be zoned to a region that will produce a Muslim president for the next term.

It was noted by Prof. Ayantayo that religion has become a huge factor that cannot be separated from politics because of the nature, culture and history of Africans, many of whom still believe in the divine theory of leadership, that their leaders are selected or appointed by God and therefore are His representatives on earth. This has invariably increased the influence of religious leaders in politics and elections. He therefore suggested making the best use of religion to prevent electoral violence by embarking on the re-orientation of religious leaders to improve their contributions towards voters’ and civic education in the country. To the politicians, he recommended that they exhibit the good democratic culture, ethics and values inherent in their respective religions when they get into offices, and not see elections as a do-or-die affair.

Prof. Ayantayo also recommended that the religious leaders use their position to counter the mantra that politics is a dirty game, and encourage their followers to get involved in politics by seeking positions through free and fair elections, and for those who are not seeking positions, they should perform their civic duty of participating in elections, while bearing in mind at all times that electoral fraud and conflict be avoided. And in cases of electoral frauds and conflicts, the judges attending to such cases should stand above board, be fair, be non-partisan and indifferent to the religions of the candidates in their judgments. 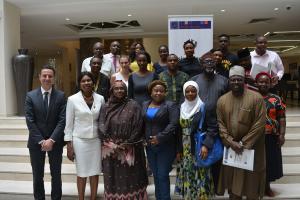