by Malak Mansour
On December 15, the Palestinian Center for Policy and Survey Research (PSR) presented the findings of the 78 joint Public Opinion Poll carried out in cooperation with the Konrad-Adenauer-Stiftung Palestine during a press conference at our office in Ramallah.
December 15, 2020 Ordering Information

Dr. Khalil Shikaki, director of the Palestinian Center for Policy and Survey Research (PSR) together with Steven Höfner, Konrad-Adenauer-Stiftung Palestine Director, presented the most important results of the 78th public opinion poll conducted in the West Bank and the Gaza Strip between 8-11 December 2020.

The survey revealed that two thirds demand the resignation of Palestinian President Mahmoud Abbas amidst a split around the resumption of coordination with Israel with a majority expressing the view that Israel came out the winner and fearing the step could expand Arab normalization deals with Israel and reduce the prospect for reconciliation and the holding of elections; but the majority expresses optimism about the Joe Biden election and support holding dialogue with the new U.S. administration

The period before the conduct of the poll witnessed several developments including the reversal of PA’s May 2020 decision to end security and civil coordination with Israel and the resumption of that coordination, the election of Joe Biden as president of the US, the signing of a normalization agreement between Sudan and Israel, and the failure of Palestinian reconciliation efforts to reach an agreement on holding Palestinian elections.

This press release addresses these issues and covers other matters such as Palestinian parliamentary and presidential elections, general conditions in the Palestinian territories, the peace process and the future possible directions for Palestinians in the absence of a viable peace process.

Total size of the sample is 1270 adults interviewed face to face in 127 randomly selected locations. Margin of error is +/-3%. For further details, contact PSR director, Dr. Khalil Shikaki, or Walid Ladadweh at tel. 02-296 4933 or email pcpsr@pcpsr.org. 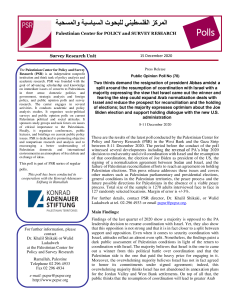