Together with our partner Abu Tor, KAS is publishing a study that addresses Gaza's electricity crisis. The studie's recommendations have been discussed with a wide range of key stakeholders and positively reinforced a new approach that focuses on critical reforms of the Gaza Electricity Distribution Company alongside the innovative utilization of modern PV plants.
February 1, 2019 Ordering Information

During the last decade, Gaza’s infrastructure has been in steady deterioration to the extent that the UN declared in 2012 that Gaza would be “unlivable” for its 2 million people by 2020. The blockade imposed on Gaza in 2006 is entering its 12th year. Israel, Egypt as well as the Gulf States, have become increasingly aware that the situation in Gaza is unsustainable; with the looming humanitarian crisis causing political instability in Gaza, the West Bank and neighboring countries. After eleven years of separation, the process of governance reunification in Gaza has been periodically stalling, but prospects for reconciliation between the Hamas administration / De Facto Government (DFG) in Gaza and the Palestinian Authority (PA) in the West Bank, have introduced a new political dynamic, with Egypt playing a central role. Concerted efforts by neighboring countries and the donor community are now needed to bring about a sustainable agreement between the two governments, reduce ongoing tensions, and stabilize the region.

There is now a strong geopolitical sentiment that the economic and humanitarian crises in Gaza need to be addressed in an effective and sustainable manner[1]. Recent deterioration in the political environment, and the renewed eruption of violent clashes, make that need even more urgent. Dealing with the ongoing electricity crisis is the first step towards economic revival. Hospitals, schools, water desalination, sewage treatment facilities and agriculture are at the receiving end of the electricity crisis, with the poorest segments of the population enduring most of the distress, as electrical generators and clean water are beyond their means. Due to a deterioration of the economic situation, UNRWA has not only experienced a sharp increase in demand for its services from its 1.3 million registered refugees and its 267 schools, but it has also incurred drastic financial cuts by the United States from $ 130 million in 2017 to $ 67 million in 2018.

This project can revitalize the economy of Gaza, through fast-track rehabilitation and development of its electricity infrastructure. It can also be implemented within the current governance framework, where DFG and PA officials cooperate at the ground level, without having to wait for a full reconciliation between the two sides. Bringing back electricity performance from 4-5 hours per day to 10-15 hours per day, may be only one dimension of a comprehensive plan to re-develop the Gaza economy, but it is an essential starting point which would have major humanitarian impact and ramifications on all other sectors, particularly on clean water delivery and sanitation treatment, but also on health and education. Manufacturing, agriculture, exports and transportation would all be revived towards outperforming their 2005 levels. It will also substantially reduce Gaza’s dependence on Israel for its energy development providing greater flexibility in implementation.

Developing Gaza’s off-shore gas reserves, building a seaport and airport, and laying a 161 kV electricity line from Israel are all essential and cost effective projects but would take several years to be fully implemented. This study proposes a strategy based on practical solutions to raise the electricity output from existing facilities within one year, and to develop new sources of solar energy.

The dimensions of the electricity crisis are addressed, particularly the breakdown of the electricity infrastructure and the institutional underpinnings of the electricity sector, such as the failure of providing a consistent supply of fuel for the Gaza power plant (Gaza Electricity Generating Company, GPP), as well as issues surrounding electricity bill collection, accountability and revenue sharing among various stakeholders.

The study then concludes with an action plan of short term measures to be implemented within a year, supported by a set of institutional reforms which would aim at ensuring a steady supply of fuel to the GPP for two years and a comprehensive reform of the electricity sector in Gaza, while developing Gas4Gaza infrastructure to supply the GPP. 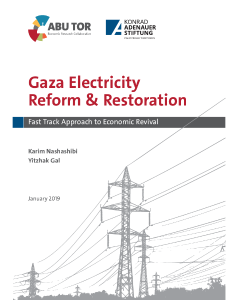