DESPITE NEGATIVE EVALUATION OF PALESTINIAN CONDITIONS SINCE THE ELECTION OF ABU MAZIN, AND DESPITE THE CONTINUED RISE IN THE POPULARITY OF HAMAS, EXPECTED ELECTIONS’ OUTCOME GIVES FATEH 44% AND HAMAS 33% OF THE SEATS OF THE NEXT PLC

These are the results of the latest poll conducted by the Palestinian Center for Policy and Survey Research in the West Bank and the Gaza Strip between June 9-11, 2005. Total size of the sample is 1320 adults interviewed face to face in 120 randomly selected locations. Margin of error is 3%.

This PSR survey was conducted with the support of the Konrad Adenauer Stiftung in Ramallah. 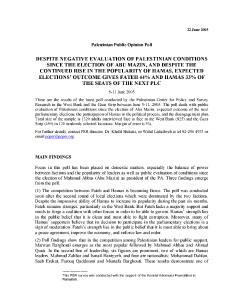