In cooperation with IPCRI, KAS Ramallah organized the presentation of the Israeli Peace Initiative (IPI) on May 11th, 2011. This initiative, drafted by an eclectic group of (former) politicians, civil society representatives, defence chiefs as well as artists, considers itself as an answer to the Arab Peace Initiative (API) of 2002, which it explicitly accepts as a framework for negotiations. After being presented to the Palestinian Authority (PA) on April 29th, the IPI was now made public to a greater audience.
May 13, 2011 Ordering Information 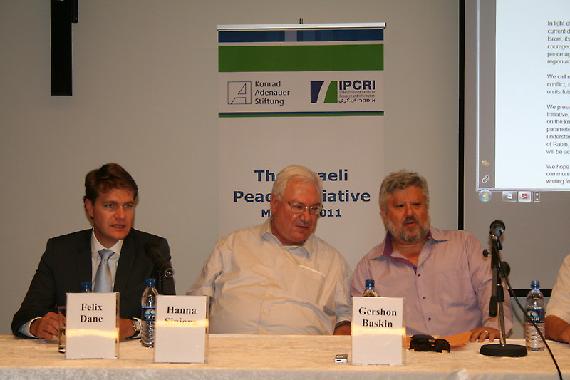 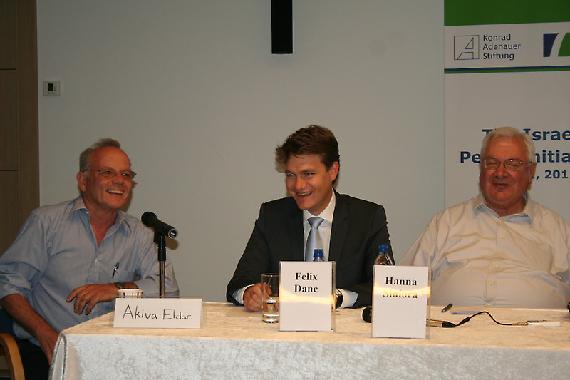 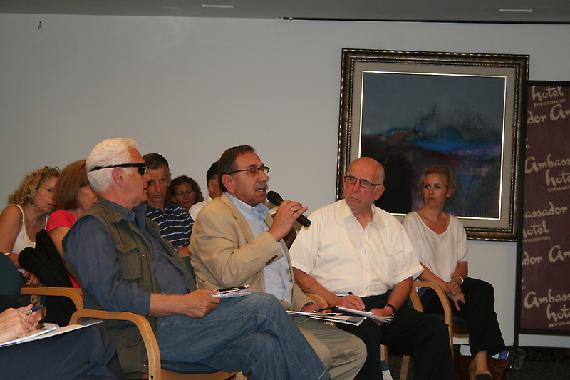 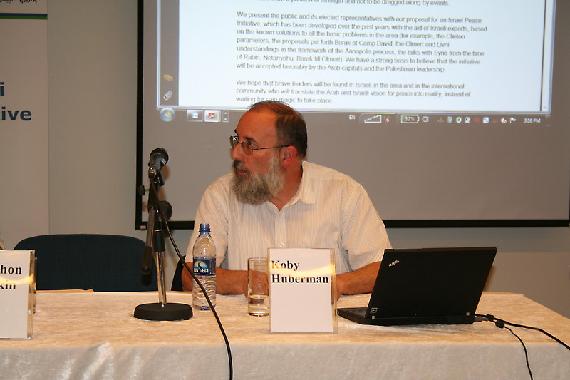 Felix Dane, Resident Representative of the Konrad-Adenauer-Stiftung (KAS) in the Palestinian Territories, opened the conference alongside the directors of the Israel/Palestine Center for Research and Information (IPCRI), Dr. Gershon Baskin and Hanna Siniora. Around 100 Israeli and Palestinian participants from politics, academics and the media, as well as representatives of international organizations and embassies, then listened to the explanations of Koby Huberman, strategist and one of the main authors of the initiative, and Akiva Eldar, journalist with the Israeli daily newspaper Haaretz.

Huberman called the IPI an Israeli compromise, designed for both sides “to be equally unhappy” with respect to the parameters of an Israeli-Palestinian peace agreement. He considers this necessary to reach a solution acceptable to both parties. To reach the broadest audience possible, the IPI was written from a centre-right wing approach that gradually shifted leftwards until being similar to the Clinton Parameters. In their initiative, the authors do not present new solutions to the conflict, but have rather rearranged goals already proposed in other initiatives. They have also on purpose left room for the negotiatiors' creativity to discuss how to reach these goals.

As the API, the core of the initiative is to create regional stability. Indeed, it addresses not only the Israeli-Palestinian conflict as such, but also Israel's conflicts with Syria and Lebanon. With regard to the former, main points include: a Palestinian state in the 1967-borders, with land swaps on the ratio 1:1; Jerusalem as the capital of both the Israeli and the Palestinian states, with Jewish parts under Israeli administration, including the Western Wall and other Jewish holy sites, and Arab parts under Palestinian administration. The Mount of the Rock however would be placed under the administration of a “Muslim Waqf”. Also, except for a symbolic number, Palestinian refugees would not be allowed to return to Israel. Nevertheless, Arab citizens of Israel would be granted civic equality as stated in Israel's 1948 declaration of independence. Also, regional economic development is considered the cementing element of a peace agreement.

Akiva Eldar called the IPI the first step towards peaceful relations between Israel and the Arab world. Moreover, he stressed that the IPI does not diminish the concept of regional security to military security, but rather broadens it to include economic security as well as the safety from natural disaster. He especially pointed out the uniqueness of the initiative in that it, other than previous initiatives, sets the end goals of a final status agreement at the same time leaving room for them to be reached. This, he says, would ease the start of new negotiations.

Subsequently to Huberman's and Eldar's explanations, the floor was opened for discussion to the numerous participants - a possibility warmly accepted.