Opening of the Al-Kasaba Film Festival

The Al-Kasaba Theater and Cinematheque has inaugurated its fifth International Film Festival on October 7th 2010 in Ramallah with a prestigious ceremony.
October 8, 2010 Ordering Information

After the opening speeches and greeting words of the sponsors, of whom one is the Konrad-Adenauer-Stiftung, the opening film “Miral”, directed by Julian Schnabel, was presented to the curious audience.The ceremony turned out to be a great success, with more than 400 visitors, including guests of the cultural and political field as well as several actors featured in the film attending it. The evening closed with a reception ceremony.

Between October 7th and October 18th, the Al-Kasaba International Film Festival will present 70 films from 32 countries of whom many have been nominated or awarded at other film festivals such as Cannes or the Berlinale.

In cooperation with the Konrad-Adenauer-Stiftung, Palestinian as well as international short films will be presented at the Festival, among others a collection of the Berlinale Short Film Section.

The screening of the movies will take place in Ramallah, Bethlehem, Jerusalem, Jenin, Nablus and Gaza City and will be attended by several Palestinian as well as international film actors and directors.

Al-Kasaba
More about this topic 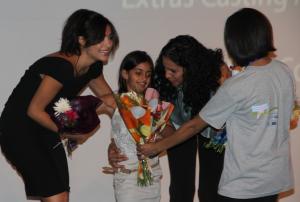